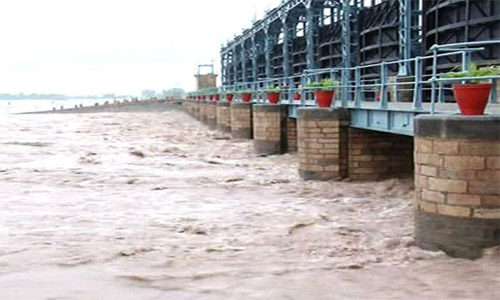 SARGODHA/JHANG/CHINIOT: The swollen river Chenab continued to wreak havoc along its path and inundated over 400 villages in Sargodha, Chiniot, Khushab and Jhang districts on Monday. Jhelum, also in flood (over 150,000 cusecs), also hit villages along its banks in Sargodha and Khushab, but the damage was not as severe as the devastation caused by Chenab which had a flow of over 800,000 cusecs.

The two rivers at their devastating peaks will meet at Trimu headworks in Jhang in ‘24 to 48 hours’. According to the Pakistan Meteorological Department’s website, the barrage will have exceptionally high flood level until Sept 12. At 6pm on Monday, it had a flow of 224,000 cusecs. Arrangements have been made to breach the protective dyke of Athara Hazari to take some pressure off Trimu headworks and protect it and Jhang city.

The headworks can sustain up to 700,000 cusecs. The dyke breach is feared to flood 250 villages in tehsil Athara Hazari, including Athara Hazari town. At their present level, Chenab and Jhelum rivers have already started inundating Mas­san and Chela areas of tehsil Jhang. Sixty villages have come under six to 10 feet of water and people have shifted to higher places. A small dyke recently constructed by the people of Kharora Bakir village succumbed to the pressure of floodwater, inundating several villages on the left bank of Chenab.

Jhang-Sargodha road between the Jhang protective dyke and Chound Bharwana and Jhang-Chiniot road between Jamiaabad and Chiniot toll plaza remained closed for the second day running. The entire Athara Hazari tehsil presented a deserted look with people having moved to safe places. Most of the 160 villages in Sargodha were under five feet water. According to unconfirmed reports, five people, including a student, have drowned. Punjab Chief Minister Shahbaz Sharif visited the flood-hit Kot Momin area in Sargodha and directed the administration to estimate the losses so that immediate relief could be provided to the affected people. Displaced people complained that rescue and relief efforts were nowhere in sight and they had left their villages on their own. In Chiniot, 140 villages have been submerged. Flood damaged thousands of houses and crops on thousands of acres on both sides of Chenab. Floodwater also affected the Chiniot-Sargodha road, near Ahmad Nagar village, which was closed to traffic.

Although the administration had been making announcements about evacuation for three days, people were not ready to leave their homes and when flood reached their areas on Monday morning, most of them were left stranded. An army helicopter and 21 boats are trying to rescue them. Hundreds of people in adjoining villages are still waiting to be evacuated or trying to get out by wading through waist-deep water, along with their cattle. Chiniot police chief Abdul Qadir Qamar said that 125 villages had been affected and there was no road access to about 30 villages. He said police had shifted some 3,000 people to safe places, adding that there were reports that two people had drowned, but these were yet to be confirmed. Amir Shahzad, of Pir Kot village, said people were not expecting such a huge flood. It suddenly came and gave them no time to save their belongings. Amir Shahzad, a stranded villager, told this correspondent by telephone that they had neither money nor food.

Meanwhile, the army said on Monday that troops had rescued 1,500 people by helicopters and boats from flood-hit areas of Jalalpur Bhattian, Pindi Bhattian, Hafizabad, Wazirabad, Wani Tarar, Rasoolnagar, Chiniot, Kot Momin and Mandi Bahauddin. According to the ISPR, 10,000 food packs were air-dropped for people trapped in various places. Army troops have also been moved to Multan, D.G. Khan, Liyyah, Sahiwal and Trimu headworks to meet the crisis situation. In Gilgit, 33 people, along with their livestock, have been evacuated from Deosai. They were trapped at the 16,000 feet height plateau because of heavy snowfall. An army relief camp has been set up at Chilum, near Astore, for providing relief goods and medical care to the affected people. Since the start of the relief operation, army troops have rescued more than 17,000 stranded people. -dawn