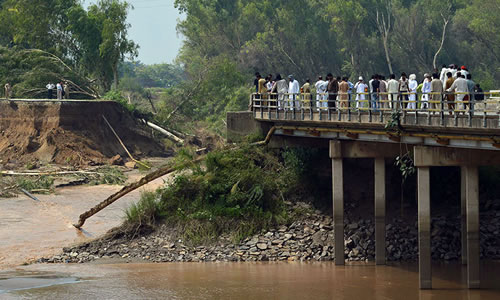 ISLAMABAD: While vast swathes of the northern part of the country have been inundated, the flood management committee met here on Monday to review coordination among different agencies concerned, but the proceedings were dominated by blame game as different agencies held each other responsible for the failure to deal with the situation.

The participants of the meeting questioned the logic of rapid filling of Mangla Dam and expressed concern over poor coordination among the agencies responsible for flood protection measures and sharing of unreliable information by India during the current flooding season.

Representatives of the Federal Flood Commission (FFC), Pakistan Indus Water Commission (PIWC), Indus River System Authority (Irsa) and National Disaster Management Authority (NDMA) attended the meeting. It said that the level of coordination among different federal and provincial agencies during the pre-flood period was reasonable but it required some improvements.

According to informed sources, the meeting was told that the PIWC had been warned by the Indian authorities that a peak of 1.25 million cusecs would hit Akhnore (India-held Kashmir) but the warnings turned out to be unrealistic. The representatives of the FFC and Irsa said that precautionary measures should have been taken to ensure full preparedness even if the Indian advisories were unreliable.

The FFC representatives criticised Irsa and the meteorological department for sharing information about expected rains and river flows with people and asked them to stop issuing such advisories. They said the Met office had predicted above average rains in Khyber Pakhtunkhwa and average rains in Punjab, but central and upper Punjab had seen above normal rain.

The meeting was told that the FFC issued a daily flood situation report early in the morning, but did not update it until the next day. In the past, a flood control centre worked round the clock and issued latest updates. On the other hand, Irsa kept on regularly issuing updates about river flows even though it has no direct role in the flood situation.

Participants of the meeting criticised Wapda authorities for filling Mangla Dam by more than eight feet in a single day.
FFC Chairman Asjad Imtiaz Ali said the flood management committee had met for the third time since Aug 26 to review coordination among different agencies.

He said the committee’s role was more important in the pre-flood period which was over and the major work had now moved into the domain of the NDMA and the provincial disaster management authorities. In reply to a question, he said that the FFC had expressed concern over swift filling of Mangla Dam and asked if standard operating procedures (SOPs), dam filling criteria and dam safety principles had been followed. He said the dam authorities stated that SOPs, criteria and the rules had been followed and there was no violation. He said that different dams had different filling criteria and while it was against the rules to fill Tarbela Dam by one foot in a day when nearing maximum conservation level, Mangla could be quickly filled as reported by the dam authorities. – DAWN