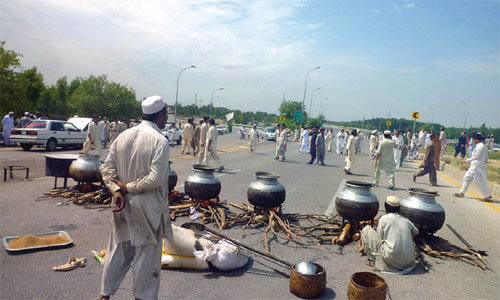 The workers of Pakistan Tehreek-i-Insaf (PTI) blocked Peshawar-Islamabad Motorway for more than six hours on Tuesday to lodge their protest against the federal government for what they called rigging the 2013 general elections. On the call of PTI chairman Imran Khan, the workers of his party staged a protest camp at Charsadda Mor and blocked the motorway for several hours to traffic. Dancing to drumbeats and party songs, the protesters also enjoyed traditional Charsadda rice.

They said that people from Khyber to Karachi wanted Nawaz Sharif to step down and form a national government to hold free, fair and transparent elections. They pledged that the protest would continue till ouster of the PML-N government. The speakers said that the present parliament was fake as it was formed in result of planned rigging. They also lashed at JUI-F emir Maulana Fazlur Rehman and QWP chief Aftab Ahmed Khan Sherpao, saying that after failing to get ministries in Khyber Pakhtunkhwa they sought attention of Nawaz Sharif to get ministries in federal government. They also criticised PTI president Javed Hashmi for the role played by him at this critical juncture. Meanwhile, the PTI workers belonging to Swabi district also blocked Peshawar-Islamabad Motorway at Swabi Interchange. The protesters, led by MNA Aqibullah Khan and PTI district president Anwar Haqdad Khan, gathered in the district headquarters and marched to Swabi Interchange where they staged a sit-in and blocked the road to traffic.

The protesters alleged that prime minister was responsible for the entire disturbed scenario in the country. The motorway remained blocked from 9am to 3pm. The protesters erected blockade on the road and warned the drivers and transporters that they should not try to cross the blockade. They chanted slogans against Nawaz Sharif and demanded his immediate resignation. It was perhaps the first time that the motorway remained blocked for such a long time by leaders and workers of a political party. The transporters and commuters faced severe hardships to reach their destinations owing to blockade of the motorway. “Waiting for six hours under the open sky is not easy. People travel through motorway to reach their destinations early,” said Azmat Ali, a passenger going to Islamabad from Peshawar. Another passenger said that support of people couldn’t be gotten through such acts. “I fear that it might backfire if the leadership of PTI doesn’t learn a lesson from its past mistakes,” he said.

In Peshawar, PTI workers continued their sit-in at Jehaz Chowk, Hayatabad on the second consecutive on Tuesday against police action in Islamabad. The sit-in was held on the call of Imran Khan to express solidarity with PTI activists injured during police baton charge in the federal capital. The protesters, led by Adviser to Chief Minister Dr Mehar Taj Roghani, renamed the Jehaz Chowk as Azadi Chowk. A large number of PTI workers including women, students and youth participated in the sit-in. Addressing on the occasion, Dr Roghani said the sit-in in Peshawar would continue as long the sit-in in Islamabad continued. She alleged that the government attacked the peaceful protestors to instigate them and defame the peaceful movement meant for ousting the government of Nawaz Sharif. -dawn