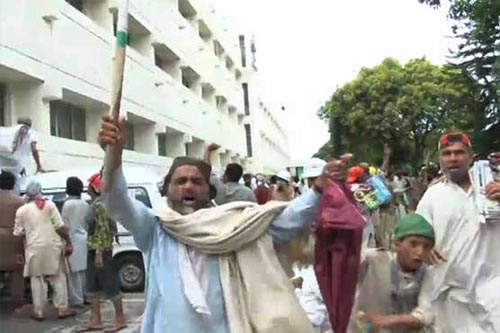 According to details, army has also been called in to control the situation. The protesters have reportedly forced the management to shutdown the transmission of PTV News and PTV World.

Fighting raged between police and anti-government protesters for the second consecutive day after the latter stormed Pak secretariat early Monday. The protesters led by PTI chairman Imran khan and PAT chief Dr Tahirul Qadri hurled stones on police, injuring SSP Asmatullah. The SSP has been shifted to hospital. Hundreds of protesters attempted to force their way into Pak secretariat early morning after the tear gas shells became unproductive due to rain.

According to reports, the protesters have also broken the gate of Pak secretariat. It is important to mention that Pak army is also present inside the Pak secretariat building. The officials have confirmed that at least three people have died while hundreds of people injured in the ongoing clashes in Islamabad. There were also reports that the anti-government protesters set a container on fire. Meanwhile, Pakistan Tehreek-e-Insaaf (PTI) chairman Imran Khan and Awami Tehreek Chief Dr Tahirul Qadri appealed to protesters to remain peaceful.

Addressing his supporters, Dr Qadri claimed that police have arrested 25,000 PAT workers. He said police resorted to shelling, adding that the protesters were peaceful. He said seven rounds of talks were held but they didn’t prove fruitful. PAT chief said 17 days have passed but our demands haven’t been fulfilled. Imran Khan meanwhile, said that PTI workers were peaceful. He urged the PAT workers to avoid clash with the security forces.  -dunyanews