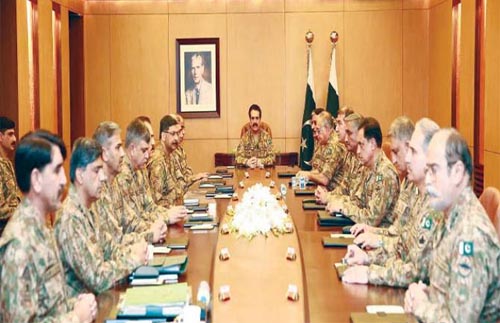 Reaffirming its support to democracy, Pakistan Army called for employing political means to resolve the existing crisis that has taken a violent turn resulting in loss of lives and large-scale injuries, and expressed reservations that further use of force will only aggravate the problem.

Chaired by Chief of Army Staff General Raheel Sharif, the swiftly called Corps Commanders Conference expressed serious concern over the existing political crisis on Sunday. The conference reaffirmed its support to democracy and reiterated that the situation should be resolved politically without wasting anytime and without recourse to violent means. According to ISPR, the conference resolved that Pakistan Army remains committed to playing its part in ensuring security of the state and will never fall short of meeting national aspirations. With this clear message from Pakistan Army of maintaining its apolitical role, the position of the government of Prime Minister Nawaz Sharif to wriggle out the crisis becomes more fragile as it has already reached the point of no return vis-a-vis handling PTI and PAT protests.

According to sources, Army Chief General Raheel Sharif took his commanders into confidence over his recent meetings with Prime Minister Nawaz Sharif, PTI Chairman Imran Khan and PAT chief Tahirul Qadri about the existing political chaos. According to defence analysts and political observers, fuss about the nature of role the government had assigned to the army chief in facilitating resolution of the crisis a few days ago can have a serious bearing. The government was left reeling from a political blowback by the statements of prime minister and his interior minister on the floor of the National Assembly regarding their request to General Sharif for his role in resolving the prevailing political crisis. The government was left embarrassed when the ISPR clarified that it was the government that had asked General Sharif to “facilitate” negotiations with the protesting parties.

The PML-N government is left with no effective administrative means to handle the crisis except giving in to pressure of the protesting parties who seems reluctant to accept anything less than resignation of the prime minister and his younger brother, Punjab Chief Minister Mian Shahbaz Sharif. In the given situation, the government may rely more on the Parliament, but many believe it would not be that effective in resolving the crisis. Observers also feared that situation would further aggravate in the coming days leaving the government in a politically precarious position that might not help it recouping to resolve the standoff with the PTI and the PAT. The government has already come under fire from people for its high-handed handling of the crisis. Apart from this, the government also compromised its democratic credentials by mishandling media professionals during live coverage of the clashes between police and protesters.

The meeting of top generals, brought forward a day, came after violence broke out Saturday night when thousands of supporters of Imran Khan and Tahirul Qadri tried to storm Prime Minister Nawaz Sharif’s house, demanding his resignation. The army statement opened with a backing for the government but ended on a hawkish note – which a senior government official said reflected differing views within the army’s top brass. “There are some who have stronger opinions and some who have softer opinions,” the official told AFP, speaking on condition of anonymity.
Country’s last period of military rule ended in 2008. But the official said another coup remained “less likely”.
“We have travelled this road for seven to eight years, so things have been tested, the institutions are much stronger,” he said.

According to Reuters, Army chief held an emergency meeting to discuss the crisis, prompting speculation that the military could take decisive action to end the crisis. Ousted from an earlier stint in office in a coup in 1999, Sharif still has a difficult relationship with the army. Even if he rides out of this crisis, Sharif is likely to remain significantly weakened for the rest of his tenure and sidelined on key issues such as foreign policy and security. -nation