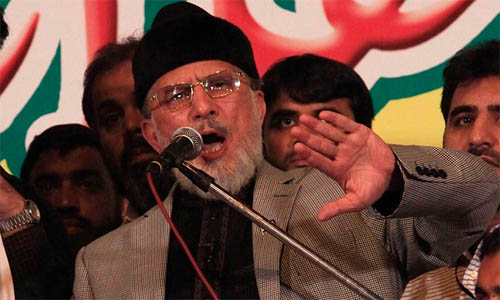 Speaking shortly after the National Assembly session where Prime Minister Nawaz Sharif and Interior Minister Chaudhry Nisar Ali Khan said they have involved the army at the behest of protesting parties, Pakistan Awami Tehreek (PAT) chief Tahirul Qadri said the government had “lied to the whole nation”. Later, speaking to his supporters, Pakistan Tehreek-i-Insaf (PTI) chief Imran Khan also denied that the PTI had invoked the army’s help to mediate with the government.

“I am not well, but I heard them and came out immediately. They have deceived the nation; they lied on the floor of the national assembly. It is pitiful that this is Pakistan Parliament,” said the PAT chief today. He addressed Nawaz as the “so-called prime minister who has come with a fake mandate” and said he wants to clarify the incorrect information given by both PML-N leaders.

“The government and PM say they did not request the army to act as mediator in this crisis. This is a lie,” he said. They requested it. We do not know when they met. But the request to the army chief and army to resolve this issue as mediator came from the prime minister and incumbent government.” The PAT chief said he came to know about the role of the army in negotiations through the media. Rejecting the statements of the prime minister and Nisar that PAT approached the army to find a solution to the crisis, he said, “I have never spoken to the army chief before in my life. I saw him for the first time [last night].”

Shedding light on his meeting with the army chief, Qadri said that Imran Khan met with the chief separately, and then the he and Imran met with him together for a brief period. “Our [PAT’s] agenda was comprehensive… PM resigning, dissolution of govt and that is why our meeting took more than three hours.” He said that he found the army chief a ‘man of word and commitment’. “He befits his job.”

Echoing Pakistan Awami Tehreek (PAT) chief Dr Tahirul Qadri, Pakistan Tehreek-i-Insaf (PTI) chairman Imran Khan said his party had not demanded of Prime Minister Nawaz Sharif to involve the Army to broker a settlement between the government and protesting parties, adding that the premier had lied in this regard. The PTI chief categorically rejected the premier’s speech in the National Assembly while addressing his supporters today. He said the party had told the army chief that the party did not repose any trust in the premier. “

How can a judicial commission be successful if Prime Minister Nawaz Sharif is in power,” Khan questioned, while referring to the commission that will be formed to investigate irregularities in the May 2013 elections. The PTI chief said that Nawaz Sharif had, without any remorse or fear, destroyed the country. Khan maintained that Nawaz will have to step down at any cost. Khan said those sitting in the Parliament were trying to protect poll rigging from coming to the forefront.