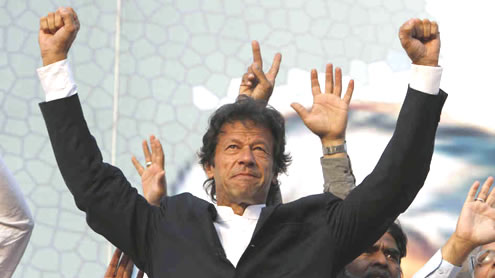 On Monday Pakistan Tehreek Insaf (PTI) chief Imran Khan refocused his rhetoric on election rigging, which had been overshadowed by his attacks on political leaders and other such antics in the past few days. However, on Monday, the former cricketer had considerable electoral issues to discuss thanks to the interview of a former election official on Sunday night, in which he had also alleged rigging in May 2013.

No wonder then that Mr Khan said that he did not have any doubt that the general elections of May 2013 were rigged by the PML-N leadership, once again reiterating that he would not leave ‘Azadi’ Square till the resignation of Prime Minister Nawaz Sharif. He was not willing to spare the ruling party however. Addressing the cheering crowds that were shouting “Go Nawaz Go”, he alleged that the PML-N and the JUI-F leadership were distributing money among their supporters to conduct rallies across the country. The PTI chief also addressed the rumours that were circulating around on Monday that the government will crackdown on the crowds following the Supreme Court orders to clear the Constitution Avenue. He warned the government against using violence as it “would be against the spirit of democracy”.

“My dear supporters – I am here for you and I will stay here till the resignation of Nawaz Sharif,” he thundered. Whether it was the sudden burst of rain, which had improved the weather in Islamabad or the latest twist in the drama thanks to the Sunday night disclosures, the crowd was charged and energetic. However the numbers seemed fewer than the previous night. “After the disclosure of Afzal Khan, the former Additional Secretary of the ECP, it is evident that the general elections of May 2013 were full of rigging incidents,” Khan said. He said that the former ECP official had confirmed the PTI’s allegations of rigging in last year’s elections. He then thanked Allah for “proving the allegations”. Khan also alleged that retired Justice Riaz Kayani, the ECP member from Punjab, was appointed by former Chief Justice Iftikhar Muhammad Chaudhry.

He added that even Afzal Khan confirmed that the returning officers were not under the supervision of the ECP.“During the elections, the former chief justice played a leading role in the rigging and helped the PML-N win the elections,” he added. Mr Khan then asserted that the role played by the former chief justice could be proved “if an independent commission starts its inquiry in this regard”. The crowds were enthralled. Nearby, the Pakistan Awami Tehreek (PAT) crowds appeared exhausted in comparison, despite a very emotional speech by their leader in which he gave a 48-hour deadline to the government.

The speech had moved his followers to tears as the PAT chief told them that he was ready for shahadat. But this still has not stopped doubts from setting in.A few of them were even whispering their regret at joining the dharna. Take the case of Sobia Khan, 30, a resident of Lahore, who is at D Chowk along with her seven-month-old daughter and her husband. She felt that it looked difficult that Prime Minister Nawaz Sharif would resign. “It is very difficult for my daughter to bear the heat,” she said. “I am worried about something happening to her,” she added. Hina Nasrullah, a masters student in English Literature from Gujranwala, said that it was very difficult for girls to sleep on the grass. “I also lost my cellphone here and now it is difficult for me to contact my mother.” The 22-year-old girl has come here alone against the wishes of her mother; her father works abroad.

But now Hina thinks her mother was right. Unlike Hina, 14-year-old Noor Fatima has been brought to the protest by her father who is a supporter of the PAT chief. “Although, food is not a problem, we have to visit the Parliament Lodges to visit the bathrooms,” she added. “It is easy to spend three or four hours a day as the PTI workers do but to stay under the open sky day and night is not easy,” she told Dawn. But despite their exhaustion and reservations, few of them are willing to say that they want to leave. -dawn

Younus Khan to Return From Sri Lanka After Nephew’s Death