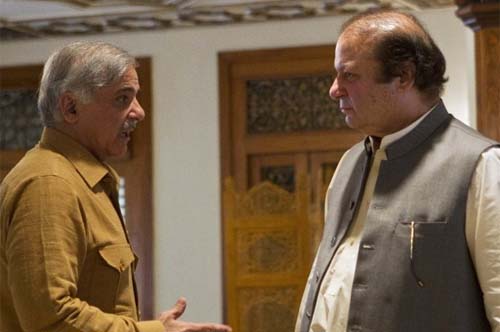 While the Pakistan Tehreek-e-Insaf (PTI) and Pakistan Awami Tehreek (PAT) persevere in their demand for the resignation of Prime Minister Nawaz Sharif and Punjab Chief Minister Shahbaz Sharif, the Sharif brothers decided on Sunday that neither of them would step down at any cost.

The decision was taken in a meeting between the Sharif brothers at the Jati Umra residence of the prime minister where they discussed the prevailing political crisis triggered by the PTI and PAT sit-ins in Islamabad and Nawaz’s meeting with PPP Co-Chairman Asif Ali Zardari. Shahbaz’s son MNA Hamza Shahbaz was also in attendance. According to sources in the PML-N, the elder Sharif has categorically told his party aides and other political parties that Shahbaz’s resignation is out of the question.

The ruling party believes that Shahbaz cannot be removed, because he has been instrumental in the electoral victory of the PML-N. In their Sunday’s meeting, the Sharif brothers decided not to give in to any ‘extra-constitutional demands’ of the PAT and PTI at any cost. In a related development, the Punjab chief minister’s spokesperson strongly contradicted media reports that Shahbaz Sharif has decided to resign. “The news items in this regard are baseless, concocted and misleading,” he said. “These mischievous news reports are based only on rumours.” The prime minister and the chief minister also decided to resume their official work in order to dispel the impression that the government has become dysfunctional due to the ongoing protest sit-ins in the federal capital.

The prime minister’s press secretary also confirmed that Nawaz will sit in his office from Monday and perform his official work as usual. The Sharif brothers, according to sources, also discussed PAT chief Dr Tahirul Qadri’s demand for the registration of an FIR against 21 people, including the premier, the Punjab chief minister, the provincial police chief and Hamza Shahbaz, in the June 17 killings at Lahore’s Model Town. The information minister has challenged in the Lahore High Court (LHC) a decision of a Lahore sessions court that ordered the registration of the FIR against the nominated accused. The Sharif brothers, however, offered Qadri that if he submits a fresh application excluding the names of the prime minister, chief minister and other senior officials, then it would be entertained by the Punjab government.

The Sharif brothers also decided to convey to Tahir-ul-Qadri if he was willing to accept a judicial commission of the Supreme Court to probe the Model Town tragedy. They also discussed that an inconclusive report of the judicial commission of the LHC should be presented before a high-level committee for its recommendations for final action. Qadri had boycotted the commission’s proceedings and demanded registration of an FIR against 21 people. Sources said the Sharif brothers have finalised the makeup of the committee, headed by a retired judge, to fix responsibility in light of the commission report so that the Punjab government should take action. -tribune