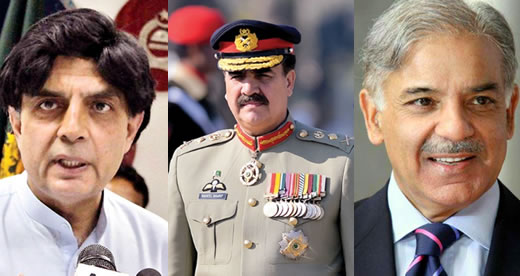 Credible sources told media that it was agreed during the meeting that dialogue should be opened immediately with Pakistan Tehreek-i-Insaf (PTI) and Pakistan Awami Tehreek (PAT) to listen to their demands. During their meeting, the army chief discussed the ‘Revolution March’ and ‘Azadi March‘ being held in the federal capital, sources said.

They also discussed the security situation in the country along with issues related to law and order. They meeting comes at the heels of the PTI chief Imran Khan and PAT chief Tahirul Qadri holding rallies in Islamabad. The PTI chief had declared a civil disobedience movement on Sunday in protest against alleged rigging during the 2013 general elections in May.

Imran Khan and Tahirul Qadri have both demanded that Prime Minister Nawaz Sharif hand in his resignation. The PML-N leadership have rejected the call for the prime minister to resign. The planned demonstrations have unnerved Sharif’s fledgling civilian government. The Punjab government has blocked roads in Model Town that lead to the Minhajul Quran secretariat.

Some members of the ruling party fear the protesters may be getting support from elements in the powerful military, which has had a series of disagreements with the government.