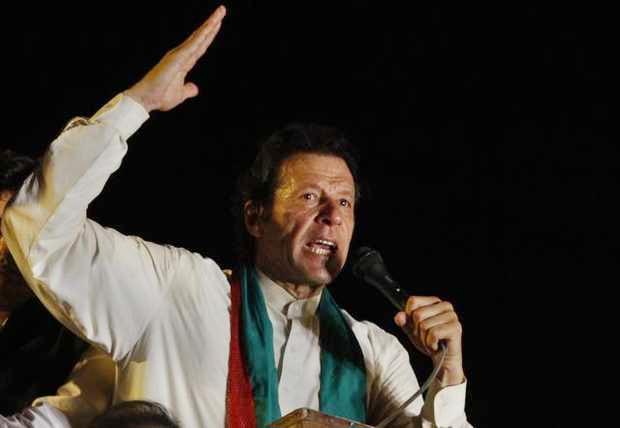 Declaring to prolong his sit-in for two more days and again asking Prime Minister Nawaz Sharif to resign within this time period, Pakistan Tehreek-e-Insaf (PTI) chief Imran Khan Sunday announced to start civil disobedience movement against the federal government.“There is only one way to get rid of this government, which is to launch a civil disobedience campaign from today,” the cricketer-turned politician said, addressing the protesters he had led to the capital from the eastern city of Lahore.

On the third consecutive day of his protest sit-in in Islamabad, he appealed to the people to stop paying utility bills and taxes to the current government, accusing PM Nawaz Sharif of plundering national wealth to furnish his business empire. In what he claimed the most important speech of his political career, Imran told the gathering, “I want assurance from you (protestors) not to pay tax, general sales tax, electricity as well as gas bills,” and he got loud answer from the protestors “we will do it, we will do it”. He claimed that he was taking this extreme step after reaching upon the conclusion that Nawaz Sharif could not be held accountable through the existing law of the land.

“If you want to save yourself from the fake and corrupt PM, you will have to participate in civil disobedience movement.” “I am giving a two-day deadline to the government,” he said, adding that after that he would not be able to stop his workers from marching on the PM House in the Red Zone, where parliament, other government buildings and embassies are located. Imran Khan’s announcement came as thousands of opposition demonstrators crowded the streets of the Pakistani capital for a second day Sunday, after a populist cleric issued a 48-hour ultimatum demanding the arrest of Sharif. Security in Islamabad has been ramped up since the protests began, with some 30,000 police and other security forces on the streets. The government has agreed to let the two groups hold rallies but many roads have been blocked off with shipping containers to protect sensitive areas.

Amid rhythm of different songs, Imran Khan asked his followers to stay there to make a new Pakistan. He appealed to the businessmen and farmers o take part in civil disobedience movement. Imran claimed that he did not want to create mayhem and ask his supporters to storm into PM House as army would intervene as a result of such a situation and the country would be pushed backwards. “I want democracy,” he claimed. Khan claims Nawaz Sharif won power fraudulently at last year’s general election. The May 2013 general election saw Sharif take power in a landslide, and international observers who monitored the polls said they were free and credible.

The protests are the culmination of a “long march” – in reality a motorised cavalcade – that set off Thursday from Lahore, around 300 kilometres away, to try to topple the government. But the fiery speeches by Khan and Tahir-ul-Qadri were not matched by manpower. Just thousands of protesters remained in the capital as of Sunday evening as against a million people promised by the pair. As the sun started setting in after two days of rainy weather in the capital, the participants of the sit-in, as announced by their party chief the other day, started moving towards the Red Zone. The mobile stage of the venue was installed at some distance from the previous one to put more pressure on the government. The police and other law enforcement agencies did not stop the protestors and silently observed the whole development.

The locals of Islamabad and Rawalpindi, unlike on other days, started pulling at the venue in the evening and PTI chief wearing white shalwar kameez came to the venue after 7pm from his Bani Gala residence and he looked quite fresh and energetic. Amid slogans of ‘Go Nawaz Go’ by a crowd that was bigger than that of the previous two days, PTI chief roared, “Mian Sahib, don’t put in difficulty neither us nor yourself and resign!” Initially, Imran gave the deadline of seven days to the government and asked his supporters to stay there for seven days, but latter he cut short it to three days and finally to two days. “Today I have two paths to follow,” Imran Khan said looking apparently satisfied with the number of the crowd. “One is that this tsunami moves ahead and assault PM House while going through Parliament House… (As) my heart is wanting to push them out and held them accountable because both – the assemblies and the PM – have been elected through rigged elections.”

He remarked, “This police would not stop the protestors and if they do, they would be killed. But these policemen are also citizens of Pakistan and I do not want this to happen.” He said he had been thinking over it the whole day. “So, I have decided the second path: to start civil disobedience movement against the government…  but we will prolong our sit-in here for two more days; sing and celebrate our independence… And if PM did not resign, I know I will not stop you from entering PM House through the parliament.” Imran Khan got assurance from his supporters that they would not move ahead from this point as he had given assurance to Interior Minister Chaudhry Nisar Ali Khan in this connection. “After this (expiry of two day deadline) I will tell Nisar that I cannot stop the tsunami,” he said. He also asked the government not to waste time in negotiations and accept his demands.

“I am going to test the nation and I believe that it will succeed in this test,” he said before announcing the civil disobedience movement. Explaining why he thought that Nawaz Sharif should resign, he told his followers that PM would put the future of the country into darkness as he would continue taking loans to run the affairs of the country. The nation will remain under debt and they would pay back these loans through draining out more money from the people’s pockets. The poor would become poorer and some family members of Sharifs richer, he said. Imran Khan alleged that Nawaz Sharif bribed journalists, judiciary and bureaucracy, and tried to bribe the military generals as well. “Nawaz bought ECP (Election Commission of Pakistan), he bought former chief justice, returning officers and Punjab caretaker CM Najam Sethi,” he said. “There were tax theft cases against the PM he said, asking, “How did his son established a 100 billion rupees company in UK.” Despite all this, the law of the land could not nab him, he added.

PTI chief said that PTI was launching a website to expose the details of the corrupt politicians and bureaucrats. He asked the bureaucrats to come out of the slavery of Sharif family. He again told his supporters that he would sit there and sleep there, though he did not honour the same commitment made on Saturday night and retired to his Bani Gala residence on Sunday morning. He asked his supporters to again gather at the venue at 7pm on Monday. Analysts warned there was no quick solution to the impasse. “Apparently there are no signs that the government and the two parties (PTI and PAT) are working towards a solution of the problem… both are sticking to their positions, leading to a deadlock,” analyst Hasan Askari said.

“If political leaders fail to resolve this problem and violence starts, then the initiative will shift to the military — either to mediate the problem or see to it that the stalemate is resolved,” he said. Senior politicians have intensified their efforts to avert a crisis, however. Sirajul Haq, chief of the religious Jamat-i-Islami party, met the opposition leader in parliament’s lower house, Syed Khursheed Shah, to discuss the situation. “The entire nation is upset over what is happening in Islamabad… we have to steer the country out of this crisis with a cool mind,” Siraj told reporters after meeting Shah in Karachi. “We will not allow democracy to be derailed at any cost.”

US Police Clash with Ferguson Protesters

US Police Clash with Ferguson Protesters