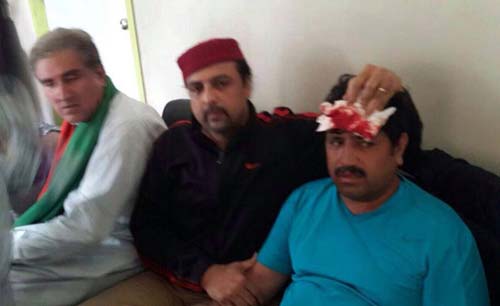 Rashid later confirmed to a private TV channel that the container was attacked four times. Rashid told the channel that he feared for their lives because the container is not bullet-proof.  “Azadi March’s caravan has been stopped on the Sheen road due to incident in Wazirabad,” said PTI vice chairman Qureshi. At least four PTI workers were injured in the attack and accused the Police for not stopping the attackers.

Railways Minister Khawaja Saad Rifique told a private channel that the PTI workers had attacked the PML-N office near GT-road and the PML-N workers reciprocated. Chief Minister Shehbaz Sharif has taken notice of the situation and requested his workers to stay calm.

Thousands of protesters led by Pakistan Tehreek-e-Insaf (PTI) chief Imran Khan enroute to Islamabad were accorded warm welcome on their arrival in Gujranwala town of Punjab, “Gujranwala packed with PTI workers. I addressed them on the outskirts of the city.

The Junoon is as strong as ever,” said Imran Khan on Twitter. Supporters of Khan and populist preacher Tahir-ul-Qadri massed separately and began a march from Lahore to Islamabad in a bid to unseat the ruling PML-N government which they claim was elected by fraud.

On their way to 300-kilometre journey to rally in Islamabad, the two groups travelling in motorised convoys are slowly moving forward. The marches are now expected to reach the heavily-guarded capital some time on Friday. Both Khan and Qadri claim the May 2013 general election was rigged and want Prime Minister Nawaz Sharif to resign and hold new polls. – SAMAA