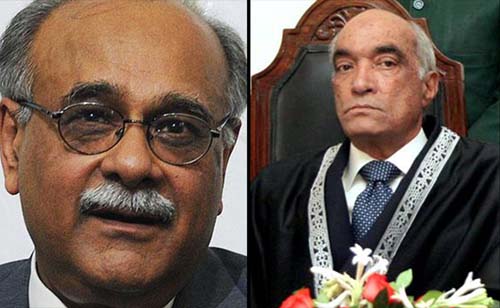 Former caretaker chief minister of Punjab Najam Sethi has said that Pakistan Tehreek-i-Insaf Chairman Imran Khan is accusing him and others of rigging the 2013 elections at the behest of what he called the “third force”.

“Imran Khan is dancing to the tune of the ‘third force’ and, therefore, he has started believing in the conspiracy theory that the May 2013 elections were rigged,” Najam Sethi told Dawn in reaction to the allegations levelled against him by Mr Khan. “I wonder how Mr Khan could believe in the conspiracy theory. On his recommendation I did not appoint Chaudhry Zaman as chief secretary of Punjab. I transferred at least 15 officers who were considered close to the Sharifs. The Sharifs were not happy over this.

“I brought upright officers for the posts of chief secretary, additional chief secretary and home secretary and nobody could point a finger at their work,” he said, adding that the education secretary had not been removed at the request of the then British ambassador because a project worth millions of British pounds was under way in the province. “The health secretary also was in the middle of negotiations with the World Bank for a grant of Rs4 billion for a project. He was also effectively controlling measles epidemic. As far as the finance secretary was concerned he was a competent officer and funds had already been frozen after the election schedule was announced,” Mr Sethi said.

He said Mr Khan should have blamed either him for being the caretaker chief minister or returning officers for the rigging. “Either the ROs or the caretaker chief minister could be involved in the rigging, and not both.” Mr Sethi, a former chairman of the Pakistan Cricket Board, said he would send a legal notice to Mr Khan for levelling baseless allegations that he did not pay taxes. “I have never got a single penny of tax waived.” He said: “Imran Khan was a good friend of mine. He turned against me when he bought the elections conspiracy theory. Besides, he (Imran) had reservations on columns about him published in The Friday Times. When a book was published on these columns and sold in the UK, Mr Khan got angry.”

JUSTICE RAMDAY: Retired Justice Khalilur Rehman Ramday, a former judge of the Supreme Court, dismissed as baseless the allegations levelled by the PTI chief against him. Talking to a private TV channel, he said: “It appears that some allies of Imran Khan are misguiding him. I have the right to take legal action against the PTI chief.” Retired Justice Riaz Kayani denied to have met Sharif brothers. “I met Ramday as a friend and no words on elections were exchanged. I never met Pervez Malik either,” he said. Mahboob Anwar said a provincial election commissioner could not increase the number of ballot papers. “Hence, there is no question of printing extra ballot papers,” he said.  -dawn