Awami and Tsunami Marches To Go Together 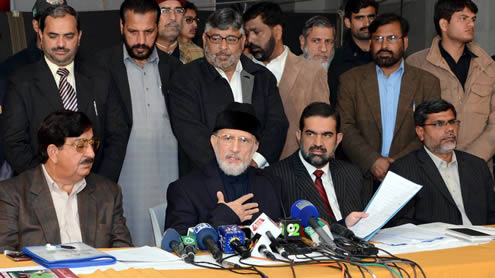 Awami and Tsunami marches to go together

The Pakistan Awami Tehrik (PAT) will start its ‘Revolution March’ from the Punjab capital on August 14, the day on which the PTI is already committed to launching their ‘Azadi March’, Dr Tahirul Qadri announced on Sunday evening.

“Both the marches will go simultaneously and (the participants thereof) will not come back till the ouster of the 14-month government”, said the firebrand leader in his two-hour speech before a charged and responsive crowd encamped near his Model Town residence for the last few days. Important leaders from the Pakistan Tehreek-i-Insaf (PTI), Muttahida Qaumi Movement (MQM), Pakistan Muslim League-Qaid (PML-Q), Majlis Wahdat-e-Muslimeen (MWM), Sunni Ittehad Council (SIC), Awami Muslim League (AML) and All Pakistan Muslim League (APML) were also present on the occasion. The willingness of the two parties to go together is a major breakthrough, the credit for which goes to the tireless efforts made by the PML-Q leaders Chaudhry Shujaat Husain and Chaudhry Pervaiz Elahi and AML leader Sheikh Rashid Ahmed, Qadri said.

Before starting his speech, Dr Qadri led dua for forgiveness of those who lost their lives at the hands of police in Model Town on June 17 and the soldiers martyred during the ongoing military operation in North Waziristan. The schedule for the ‘Revolution March’ was made public a day before the corps commanders conference, which is expected to discuss it at length on Monday.  Dr Qadri told his supporters that he has received information that rulers had plotted to assassinate him and he could be killed any time. If he was assassinated, he said, they should take revenge on Nawaz Sharif and Shahbaz Sharif. None of them should be spared, said the PAT chief, whose address was telecast live by all TV channels.

To ensure that the PAT and PTI chiefs stayed in the federal capital along with their supporters till the success of the mission, Dr Qadri said any one who retreated should be eliminated. All the supporters already present at Model Town pledged to stay there for another three days during which Quran Khwani would be offered for those martyred on Sunday. Before announcing the march date, Dr Qadri highlighted the significance of martyrdom and the reward promised by Almighty Allah to those who lay down their lives for sacred causes. “It’s either revolution or martyrdom”, he said, making it clear that there was no other option. The PAT leader said political parties alone could not bring about the revolution. He urged the nation to play its role for the sacred cause.

He said those who would be participating in the march could have to starve for three days. Advising them to go for fasting, he declared that the marchers would remain peaceful in all situations. He rejected all allegations of money laundering and tax evasion against him or PAT’s involvement in the death of a police constable. The government, he alleged, wanted to provoke the PAT workers to cause clashes. But, he said, the PAT would keep calm and endure the oppression. “In spite of state aggression, brutality and terrorism, we’ll remain non-violent”. He said the government had blocked all roads leading to the PAT Secretariat, causing serious problems for the people.

Those present on the occasion included Mahmoodur Rashid (PTI), Chaudhry Shujaat Husain and Chaudhry Pervaiz Elahi (PML-Q), Sheikh Rashid Ahmed (AML), Rashid Godail (MQM), Ahmed Raza Kasuri (APML), Sahibzada Hamid Raza (SIC), Amin Shaheedi (MWM), and Malik Ghulam Mustaf Khar (PML-Functional). PTI senior leader Mian Mehmoodur Rasheed in his address admired the determination of PAT workers and said rulers would not be able to face the ideological people. He said he wanted to tell the Sharifs that no one could stop the change after the deaths of so many innocent people. The PTI leader, who is also opposition leader in the Punjab Assembly, said Model Town looked like ‘Karbala’ due to the rulers’ tyranny.

MQM leader Rasheed Godail said protests and public gatherings were democratic right of the people and no government could deny this right to anyone. He said whosoever talked of the change, the MQM would support him. He said feudal mindset has to go now. He said they wanted a system where poor could reach the parliament.
AML chief Sheikh Rashid Ahmed said oppressors, dacoits and corrupts people were in occupation of the country. If people came out with Dr Qadri and Imran Khan, stiff-necked Sharif would sober up. Rejecting reports that the army was with the government, the AML leader said facial expression of Gen Raheel at Saturday’s meeting belied this impression. He said now the issue was not of recounting of votes of four or ten seats, rather it was issue of getting rid of the government. -nation