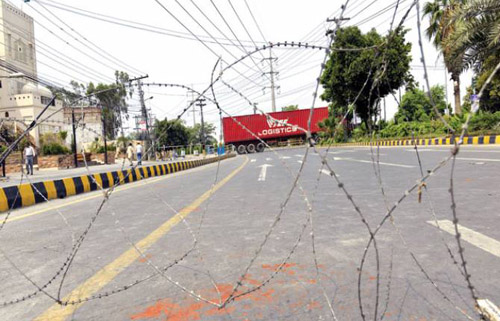 PAT chief Dr Tahirul Qadri’s movement was confined to his residence on Thursday as the police lay siege to his house and the party secretariat and blocked the main roads leading there, by erecting barriers and placing containers in the Model Town neigh bour hood.

Heavy police contingents are on guard around the Minhaj-ul-Quran Secretariat as well to cope with any emergent situation. Several police pickets are also set up in the locality and barriers erected to restrict the movement of PAT workers.  “We are strictly ordered to stop Qadri from leaving his residence and his supporters to converge in front of the secretariat,” a police officer told reporters at a picket set up close to the party headquarters.  Even the police on Thursday was unwilling to allow the vehicles of the opposition leaders who wanted to visit the secretariat. “We will not allow any vehicle of the opposition leaders as there is a possibility that they may take Tahirul Qadri’s along with them on return,” a police officer commented, requesting anonymity.

Following a heavy deployment of police force, Model Town appears to be a “no-go area.”  On the other hand, the provincial hierarchy is yet to decide whether or not a full-fledged operation be launched at the PAT Secretariat to capture Qadri who is wanted by the police in connection with a criminal case.  Lahore police Wednesday booked the PAT chairman on the charge of waging a war against the state, hurling threats and inciting violence. Police sources claimed the first information report (FIR) was sealed on the government orders and further proceedings were deferred as the investigation of the case has yet to be handed over to any investigator. Political pundits say the government is using the FIR as a bargaining chip to reach some settlement with Qadri.

Instead of acting according to the law, cops ready to raid are awaiting government instructions to begin ‘capture Qadri’ operation at the PAT Secretariat. The PAT chief has not approached the courts for pre-arrest bail.
“The decision to arrest Tahirul Qadri will be taken at the highest level. Police are there and are ready to raid, but the government has yet to give a green signal to the law-enforcing agency,” a police investigator disclosed to The Nation.
As the riot police reached the PAT headquarters late Wednesday, a large number of the party workers, armed with rocks and sticks, gathered outside the secretariat to support their chief.  Local residents are facing immense problems because of the police blockade as they are not being allowed to go to their residence in cars.

The police have also hired hundreds of containers from different companies to block the entry and exit points and some others spots in Lahore.  As the Martyrs’ Day announced by PAT is approaching fast, both the PAT and the government are busy in preparations. The PAT is preparing for observing the day while the government machinery is all set to stop the movement by using various tactics.  However, a large number of PAT workers from different parts of the province managed to reach PAT headquarters on Thursday. A camp was also set up by the female wing of PAT in front of Qadri’s residence.

Meanwhile, a large number of PAT workers were seen sitting in front of the PAT Secretariat. More than 30 buses were also seen parked at a public park in front of the PAT Secretariat to provide transport facility to the workers on August 10. To combat the possible police attack, the PAT workers have collected a huge stock of sticks and foam pads as preventive measures.  Some PAT leaders claimed that ahead of Youm-e-Shuhada, more than 500 activists were arrested by the police across the Punjab.  Since his landing in Lahore, the Canada-based cleric has been threatening to overthrow the PMLN-led regime by leading a revolution with the support of opposition parties. Although Qadri was literally put under house arrest, a senior police officer denied the reports.