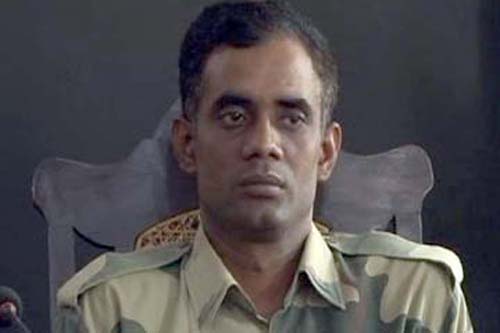 A Border Security Force Soldier , who was swept away into Pakistan by the strong currents of the Chenab River and picked up by Pakistan Rangers, has been released. He was handed over to his battalion commander Varesh Singh.

Hours before he was scheduled to be released, the trooper, Satyasheel Yadav, had  addressed a press conference in Sialkot in Pakistan, saying he had been treated well, was comfortable and was happy to go home. (After Falling Into River, BSF Soldier  is in Pakistan’s Custody), “They made me comfortable. I was given food. I have no complaints. I am very happy I am going home,” he said in a brief statement, flanked by the Rangers.  The crossover took place at an octroi post along the border. Officials say the Soldier  will go through a medical test and will be debriefed. Earlier, Mr Yadav detailed how the boat that he was patrolling the river in capsized and he was swept into Pakistani waters on Wednesday.

“The Pakistani post was close by. I jumped out of the boat with a life jacket on and tried to swim, but couldn’t. The Pakistani Rangers took me out, asked me who I was. I told them my name and that I am from the 33rd battalion,” he said.  The 30-year-old soldier also said, “They kept me better than I had thought they would.” Pakistan also returned the boat, along with a couple of bulletproof vests in it. Indian officials have said that Mr Yadav and three others were negotiating a narrow bend in the river in the Aknoor sector when the engine of their motorboat failed. The soldier was kept at Pakistan army’s Markiwalla camp.

Sources said he was questioned about troop deployment at the border and weapons by Pakistan’s powerful spy agency Inter-Services Intelligence. “Yes, we have arrested an Indian border security official. He is currently under investigation and being treated very well,” Pakistan Foreign Officer spokesperson Tasnim Aslam said on Thursday. At a flag meeting with the BSF on Thursday, Pakistan said he would be released today.  Mr Yadav’s battalion had recently shifted to the border from Hisar in Haryana.