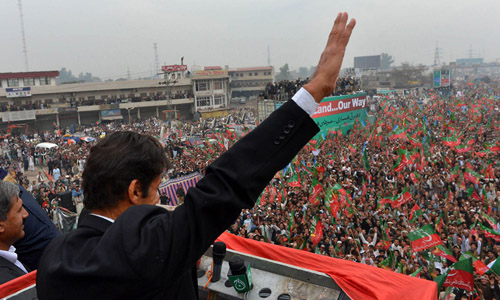 Leaders of the Pakistan Tehreek-i-Insaf warn that ‘tsunami’ may unleash before Azadi March if the government tries to arrest party high command including Imran Khan. The government has a plan to arrest 10 top leaders of the party on Aug 12 and make all-out efforts to ‘fail’ the long march, they say and add that the police are harassing party leaders and workers and uprooting the registration camps across the province.

They say the government is planning to arrest Imran Khan, Shah Mahmood Qureshi, Asad Umar, Ejaz Chaudhry and others. The party chairman also faces life threats, they say. Meanwhile, Imran Khan’s instructions have been conveyed to all formations in the party to avoid arrests even if the leaders need to change their locations and mobile phone numbers.  “I do not need political martyrs who will say afterwards that they were arrested,” a party leader quoted Imran as having said.

Hundreds of incidents are being reported all over Punjab that the PTI leaders and active workers are being picked up from their residences at night and released in the morning after getting an undertaking that they will not participate in the long march. “Policemen’s jobs have been linked to cracking down on potential participants in Azadi March,” said PTI Punjab President Ejaz Chaudhry, who was flanked by Information Secretary Andleeb Abbas, at a news conference at party’s provincial secretariat in Model Town on Thursday. Mr Chaudhry said he had told Chief Minister Shahbaz Sharif that the PTI leadership would respond in the tone he (CM) would use for its leaders and workers.

He also refused to buy government’s claims about its performance during the past 14 months. He condemned registration of a case against Pakistan Awami Tehreek chairman Dr Tahirul Qadri and blockade of roads around Model Town and Faisal Town by placing containers. Alleging that the police had uprooted PTI’s registration camps in 11 districts, he asserted that the party would re-establish these. It would establish a total of 800 camps in the province, he said, adding that the PTI had already completed registration of 100,000 motorcycles for the march. -dawn