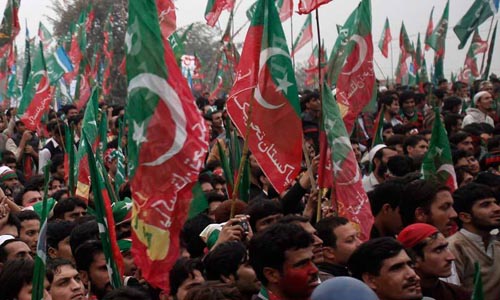 The Pakistan Tehreek-i-Insaf leadership has asked its workers to remain ‘unarmed’, but besiege police stations and roads if police try to detain them or impound their motorcycles. In order to counter police highhandedness ahead of the Azadi March on Aug 14, the Insaf Youth Wing (IYW) has constituted a 3,000-member quick response force called as ‘Insaf Youth Special Services Group’ (IY-SSG) to give cover to participants of the long march.

Although Imran Khan has repeatedly warned police against obeying illegal orders of the authorities, the PTI Punjab office and residences of party workers were raided by police on Wednesday. Police have also started impounding motorcycles and harassing people. The PTI officials, including those dealing with media, had gone underground to avoid arrests. The PTI Punjab, Lahore and IYW have held meetings to counter the situation. It is learnt that the PTI chairman’s appeal has been conveyed to traders for giving funds to make Azadi March a success.

The party leadership has asked its workers to store petrol in case petrol pumps were ordered closed. Pakistan Tehreek-i-Insaf Punjab chapter president Ijaz Chaudhry that the government had started using police for its political designs. “The government will see massive protest demonstrations across the province if police tried to stop protesters from using their democratic right,” he added. He said lawyers’ wings of the party in all districts had been asked to remain vigilant to offer legal aid to workers during encounters with police or in courts. Answering a question, Mr Chaudhry said the workers had been asked to protest against police highhandedness, but in a peaceful manner.

He said the party had established camps across Punjab to register workers with motorcycles in order to bring out a caravan of 100,000 bikes on Aug 14. The PTI Lahore chapter said that it would paralyse the city if police kept on arresting workers and impounding bikes. It has also planned to move the Lahore High Court against illegal impounding of motorcycles. PTI Lahore president Abdul Aleem Khan said the Azadi March would begin from Imran Khan’s Zaman Park residence. He said 10,000 workers would guard Mr Khan’s residence from Aug 11 till the formal beginning of the long march. Aleem Khan said workers had been visiting door to door to invite people to take part in the Azadi March.