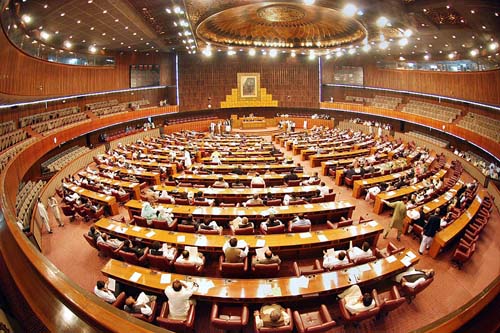 The National Assembly called on Monday for an emergency session of the Organisation of Islamic Cooperation (OIC) to take “effective action” against the Israeli invasion of Gaza after the government managed to skip an opposition-sought debate on its controversial move to call in troops in Islamabad without any judicial oversight.

But before the adoption of a unanimous resolution condemning “brutal Israeli strikes” against the Palestinian people of Gaza for four weeks, the opening of a new session of the house was marked by fireworks over a notification issued by the government last month authorizing itself to use troops in the capital under Article 245 of the Constitution without being challenged by courts. The opposition had called for an immediate adoption of the resolution on Gaza without a debate and threatened to boycott the proceedings if the government did not allow a discussion on the notification, which critics say is meant to be used to block a threatened August 14 march on Islamabad by the Pakistan Tehreek-i-Insaf.

However, Leader of the Opposition Khursheed Ahmed Shah agreed to a debate on Gaza as sought by the government and its allies, saying he had been assured by Science and Technology Minister Zahid Hamid that the invocation of Article 245 would also be discussed immediately afterwards instead of an earlier decision of a multi-party business advisory committee to take up the matter on Wednesday. But that assurance did not materialise after Mr Hamid, who overlooks most of the government’s business in the house, and Kashmir Affairs Minister Birjees Tahir were seen conferring with the opposition leader inside the house, apparently to persuade him to let the day be devoted to Gaza.

The resolution, moved by the Prime Minister’s Adviser on Foreign Affairs and National Security, Sartaj Aziz, voiced the house’s “heartfelt sympathy for the Palestinian people and unequivocal support for their cause” and called upon the OIC to “convene an emergency session in order to take effective action to stop Israeli brutality against innocent civilians forthwith”.

It did not say whether the session of the 57-state organisation should be at the summit-level as demanded by some members of the house – some recalled the Islamic summit called in Lahore in 1974 by then prime minister Zulfikar Ali Bhutto – or at the foreign ministers’ level. In a policy speech earlier, Mr Aziz had told the house that in a meeting with him earlier in the day the visiting OIC secretary general, Iyad Ameen Abdullah Madani, had “indicated” calling “such a meeting” on August 12, but he spoke of no possible venue.

The resolution also called upon the international community to negotiate an “immediate and unconditional ceasefire” in Gaza and require Israel to remove its forces from the area and end its blockade of Gaza. The resolution also demanded that the international community ensure an immediate resumption of negotiations to achieve a “comprehensive peace” agreement providing for the establishment of a “viable, geographically contiguous Palestinian state based on pre-1967 borders” with Jerusalem as its capital and compensation for the destruction of the entire infrastructure of Gaza.

It called upon the Muslim Ummah to “focus, in parallel with political initiatives already taken, on direct and tangible support for the affected persons (in Gaza) by providing substantial financial assistance to alleviate their immense suffering and meet their growing humanitarian needs”. Some opposition lawmakers pressed for an explanation from the government about the justification for invoking Article 245 right in this sitting rather than waiting until Wednesday – because Tuesday is to be devoted to private members’ business – with Mr Khursheed Shah saying “we will boycott unless (invocation of Article) 245 is taken up”.

But the opposition leader angrily rejected a suggestion by a government ally, JUI-F leader Maulana Fazlur Rehman, that he gave less importance to Gaza, saying that his Pakistan People’s Party and the rest of opposition were “far ahead of the government” in supporting the Palestinian cause. Awami Muslim League leader Sheikh Rashid Ahmed walked out of the house announcing his boycott of the sitting as the government and its allies, and even the opposition Jamaat-i-Islami, a PTI ally, insisted on holding a debate on Gaza before passing the resolution.

The day was also marked by a token walkout by the Muttahida Qaumi Movement to protest against an alleged overnight raid on the Karachi home of MQM parliamentary leader Dr Farooq Sattar by paramilitary Rangers and arrest of what a party lawmaker, Abdul Rashid Godel, called innocent party activists, and protests over the July 31 killing of two relatives of a PTI Hindu lawmaker, Lal Chand, in Umarkot district of the Sindh province. -dawn