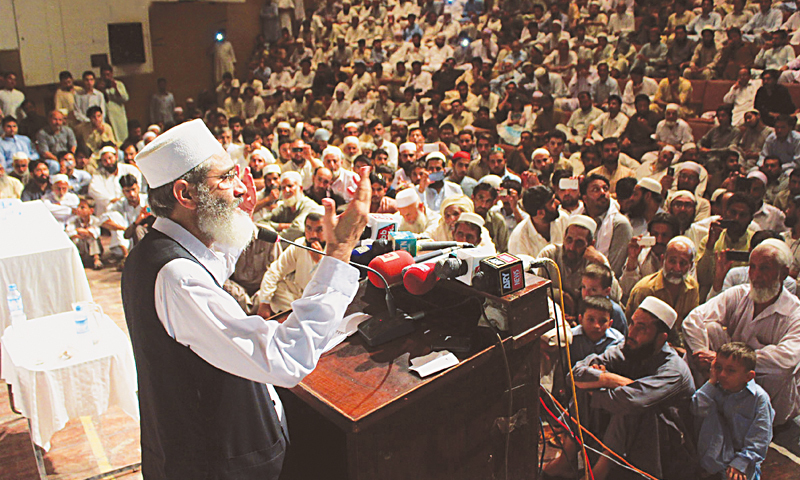 Pakistan Tehreek-i-Insaf’s partners in the Khyber Pakhtunkhwa coalition government have rejected its idea about dissolution of the provincial assembly. Jamaat-i-Islami Amir Sirajul Haq and Shahram Tarki, parliamentary party leader of the Awami Jamhuri Itehad Pakis­tan, discussed the issue and later addressed a press conference at Al Markaz-i-Islami here on Sunday.

Being the senior partner the PTI had the right to pack up the government, but the JI and AJIP would not support dissolution of the assembly, said a joint statement issued by the two parties. The two leaders disagreed with statements of PTI Chair­man Imran Khan and Chief Minister Pervez Khattak about assembly’s dissolution. Article 112 of the Constitution empowers the chief minister to advise the governor to dissolve the assembly. The assembly stands dissolved at the expiry of 48 hours after the chief minister’s advice. The PTI, being the single largest party in the 124-member assembly, has 55 seats, while the JI has eight and AJIP five. Two independent lawmakers also support the government. In the opposition, the JUI-F has 17 seats, PML-N 17, Quami Watan Party 10, the PPP five and Awami National Party five.

The joint statement said that people would not support the PTI’s proposal for dissolution of the KP assembly. It said that before dismissing the government the PTI was bound to discuss the matter with its coalition partners. Later, Sirajul Haq told newsmen that the PTI had the right to hold Azadi March in Islam­abad, but it had not held consultations with its coalition partners about the march. He urged Prime Minister Nawaz Sharif to allow the PTI to hold the march. The JI chief said that he and Shahram Tarki would meet PTI Vice Chairman Shah Mahmood Qureshi and Chief Minister Pervez Khattak in Islamabad on Monday.

On Saturday, Sirajul Haq had told his party workers in Bannu that the JI was against the PTI’s proposal about dissolution of the assembly, adding that it would not support what he termed an undemocratic move. Sources in the PTI said that Imran Khan had recently told his close associates that he was serious about dissolution of the assembly.  “I am not satisfied with the system and can get the KP assembly dissolved,” an insider quoted him as saying. “Imran is serious about it and can take an extreme step,” he said, adding that the next three days would be crucial. Meanwhile, the combined opposition has started working out a plan to block the assembly dissolution move. -dawn