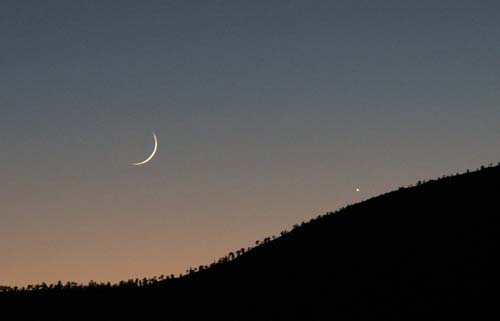 Eidul Fitr most likely on Tuesday

Eidul Fitr is most likely to fall on July 29 (Tuesday) as all the key astronomical parameters are expecting Shawal moon sighting on July 28 (Monday).  There are strong possibilities of moon sighting when it is 6 degree or more above the horizon, duration of visibility after sunset is above 30 minutes and its age is over 30 hours.

The new moon of Shawal will born on crossing conjunction point at 03:42 PST on July 27 and as such its age after the sunset on July 28 will be about 40 hours, it will stay from 31 to 45 minutes at 4-9 degree above the horizon in different parts of the country. As such all three astronomical parameters will be fulfilled in major parts of the country on 29th of Ramazan provided the weather is conducive for Shawal moon sighting.  Moon will be visible for 31 minutes in Parachinar and 45 minutes in Jiwani and Hyderabad after the sunset on July 28, it will be over 4-47 degree above the horizon in Chitral and above 9-11 in Pasni.

Moon will be visible for 31 minutes after the sunset in Parachinar, 33 minutes in Chitral and Skardu, 34 minutes in Drosh, 35 minutes in Peshawar, Muzaffarabad and Islamabad, 36 minutes in Jhelum and Gilgit, 37 minutes in Sialkot and Zhob, 38 minutes in Lahore, 39 minutes in Okara and Multan, 40 minutes in Barkhan, 41 minutes in Dalbandin, 42 minutes in Jacobabad, 44 minutes in Karachi, Nawabshah and Chhor and 45 minutes in Jiwani and Pasni. As experts are expecting fair/partly cloudy weather in most parts of the country on July 28, there are strong possibilities of Shawal moon sighting in central, southern Punjab and costal areas of Balochistan and Sindh.

Meanwhile, parts of the country on Tuesday remained in the grip of muggy weather with frequent tripping and unscheduled loadshedding adding to the woes of heat-stricken people. Weather remained hot and humid in most parts of the country. However, rain-thundershower occurred at a few places in Gujranwala division and Kashmir.  Nokkundi remained hottest place in the country where mercury rose as high as 46 degree Celsius. Maximum temperature in Sibbi and Dadu was recorded 45 C while Noorpur Thal 44 C. In Lahore, maximum and minimum temperature was recorded 39 C and 29 C respectively.

Relative humidity in the evening was recorded 43 percent.  The people avoided unnecessarily coming out, reducing traffic on otherwise busy roads at noon and in the afternoon. Lahore Canal, as usual, attracted a large number of people including women and children. Not only youth but elderly people were also seen taking bath.  Local meteorological department has forecast mainly hot and humid weather for most parts of the country during next couple of days. However, rain-thundershower is expected at isolated places in Kashmir, Islamabad, Rawalpindi, Lahore, Gujranwala, Malakand, Hazara, Mirpurkhas divisions.  -nation