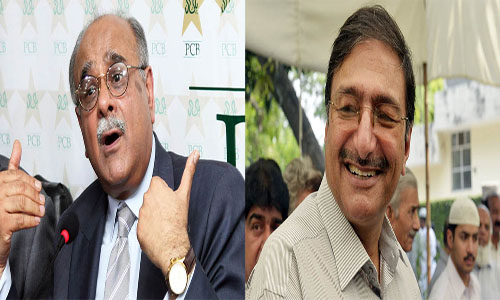 A two-judge bench of the Supreme Court comprising Justice Anwar Zaheer Jamali and Justice Mian Saqib Nisar is set to hear PCB case at its Lahore Registry Branch on Monday to decide fate of Pakistan Cricket Board (PCB) chairman. It will be for the first time that hearing of the case will be held here as earlier hearings were held in Islamabad.

The case involves incumbent PCB chairman Najam Sethi and Zaka Ashraf with the latter being restored as PCB chairman by the Islamabad High Court but the Inter-provincial ministry filed a review petition in the apex court against the decision. The Supreme Court has also suspended government notification, issued during proceedings of the case, under which new elections for the PCB chairman were to be held. In keeping with the notification only Najam Sethi was allowed to contest the elections against one Umer Iqbal.

Also, the Supreme Court asked the government to also allow Zaka Ashraf to contest the elections against Sethi but the government was unwilling to do so. Moreover, the bench will also hear petitions filed by 20 PCB employees sacked by Sethi but restored by the Islamabad High Court. Their fate hangs in the balance in wake of the inter-provincial ministry appeal before the apex court. The case of former chief selector Mohammad Ilyas who was replaced with Moin Khan by Sethi is also on the list. -dawn