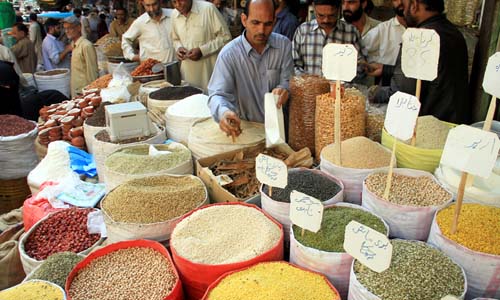 Karachiites are paying more for essentials during this Ramazan compared to residents of other parts of the country, particularly Lahore, where prices are relatively stable.

There is, however, a reason why people here are worst hit by profiteering: the price checking campaign is being conducted with the help of only 60 officials in Karachi, a city of more than 20 million. Comparatively, price monitoring staff is almost double in Lahore, whose population is not even half of Karachi.

But Commissioner Karachi Shoaib Ahmed Siddiqui still thinks he can beat the menace of profiteering with around 31 assistant commissioners, 20 Mukhtiarkars, six deputy commissioners and six additional deputy commissioners. It is observed that retailers do not pay much attention to random checking exercise and resume overcharging as soon as monitoring teams leave. Moreover, absence of complaint centres has left consumers at the mercy of market players. So far, efforts of the city administration in Karachi have proved to be futile as rarely a commodity is sold at the control rate. For example, live bird and its meat price is fixed at Rs146 and Rs245 per kg, but retailers are charging Rs180 and Rs300 per kg.

Commissioner Karachi Shoaib Ahmed Siddiqui refused to accept that price monitoring is more effective in Punjab. He said, “In 30 per cent areas of Karachi, products are available at control rate. The percentage will improve, if we include Bachat Bazaars.” Despite limitation in the last 13 to 14 months, 1,000 people were sent to jail and so far challans worth Rs32,000 have been made against profiteers and Rs55m fine has been recovered from them. During first 11 days of Ramzan, 2,551 challans were made and Rs4.8m was recovered as fine while 257 persons were arrested. He favoured representation of city governments in the meeting of National Price Monitoring Committee. He said he had also informed the FBR that most of retailers and wholesalers do not offer receipts.

DCO Lahore Capt (retd) Mohammad Usman Younus claimed that prices of fruits, vegetables and grocery items are stable in Lahore this year due to aggressive price checking. Over 800 people have been arrested for overcharging and Rs3.4 million fine has been recovered. “We are focusing more on arrest of profiteers rather than imposing fines on retailers,” he told Dawn from Lahore. He said 89 price magistrates are actively controlling prices. “I have requested for 15 more additional magistrates,” he added. “We have identified 36 critical markets where duty magistrates with special powers at camp offices are looking after price checking.”