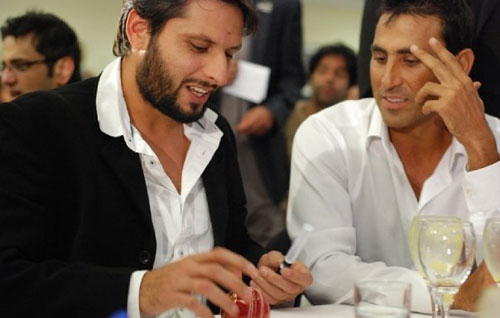 Renowned Test cricketer Younis Khan distributed relief goods, Eid gifts and sports gear among the internally displaced persons of North Waziristan Agency here on Sunday. A function to this effect was arranged by Al-Khadmat Foundation in a relief camp at Bannu.

The relief goods were provided by Shahid Afridi Foundation and Umair Sana Foundation. Provincial minister for local government Inayatullah and senior journalist Talat Hussain also graced the occasion as guests. Speaking on this occasion, Inayatullah assured the IDPs that the whole nation stood by them. He appealed to the people to help the government lift suffering of the displaced people.

“We will not let the IDPs alone and will utilise all available resources to facilitate them in this hour of need,” he added. The provincial minister lauded the efforts of cricketers, Shahid Khan Afridi and Younis Khan, for extending all out support to the IDPs. He said that the government had taken it as a challenge to root out menace of terrorism. Mr Inayatullah also appealed to the people to pray to Allah for return of the IDPs to their homes in a dignified way.

He said the Pak Army operation against Taliban militants would achieve success and peace be restored to the tribal region. The minister said that concerned authorities had been directed not to carry out load shedding in the IDPs camps. At the end, Younis Khan along with others distributed Eid gifts, bangles, clothes, edibles and other relief goods among IDPs. -dawn