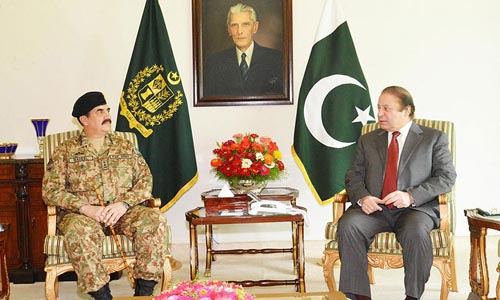 Prime Minister Nawaz Sharif and Chief of Army Staff General Raheel Sharif held an hour-long one-to-one meeting on Wednesday, something which, according to a government source, has become a regular feature whenever the two meet.

According to an official communique released after the meeting, the two discussed the Operation Zarb-i-Azb in North Waziristan. But a source in the PML-N said these regular meetings between the army chief and the prime minister were meant to send a message to detractors that both leaders “are on the same page”. Observers believe that the ongoing trial under Article 6 of retired General Pervez Musharraf and the standoff between the Inter-Services Intelligence and a media house led to differences between the civilian and military leaderships.

“While this is true to a certain extent, the relationship is getting better with time,” the PML-N leader said, adding that the government was fully behind the army and will provide it with all available resources to fight militants. A senior military official told Dawn that one-to-one meetings between the Nawaz Sharif and the army chief weren’t an entirely new phenomenon. During the PPP’s tenure, both leaders met each other regularly, he said, adding that this was the prime minister’s prerogative.

Dismissing rumours that the military establishment was pushing anti-government political parties to join hands, the officer said: “The army is focused on the operation in North Waziristan and looking after the internally displaced persons (IDPs). We are happy that all political parties are supporting the army against the militants.” -dawn