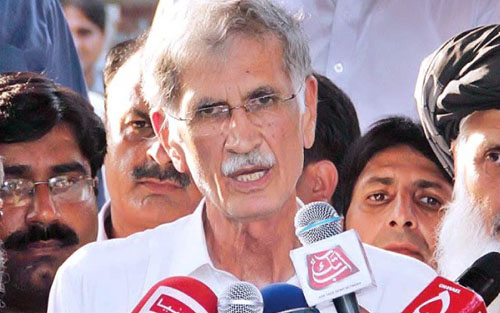 Khyber Pakhtunkhwa Chief Minister Pervez Khattak threatened here on Thursday to lead a long march against prolonged power outages in the province if the problem was not resolved. Talking to journalists after returning from Islamabad, he said that federal ministry for water and power was responsible for excessive outrages and over-billing in the province.

Criticising the statements issued by Federal Minister of State for Water and Power Abid Sher Ali against the provincial government on different occasions, the chief minister asked him to revamp the entire system of electricity. He asked the minister of state to stop blatant corruption in Wadpa instead of using derogatory language against the people of Khyber Pakhtunkhwa. He said that instead of pacifying, Abid Sher Ali was deteriorating the situation by abusing the people.

Pervez Khattak said that the minister of state was confusing people instead of giving a proper direction to them. He said that the people of Khyber Pakhtunkhwa would launch long march against outdated system of Wapda and he himself would lead them if it was not revamped. “FIA has launched inquiries against all stores of Wapda, which has stopped provising transformers to consumers and people are bearing loadshedding even in the holy month of Ramazan,” Mr Khattak said. He said low power voltage and prolonged load shedding of electricity were the biggest problems of the province.

The federal government was trying to hide its incapability and shift its responsibility to the provincial government, he added. The chief minister asked the federal government to concentrate on Wapda as it was looted by corrupt elements. He said that Wapda should revamp its system rather than putting burden on the poor and downtrodden. The provincial government had extended full support to Wapda staff and deployed police to stop theft of electricity, Mr Khattak said. Unfortunately 50 per cent electricity was stolen and the remaining was lost owing to the old supply lines, he added. -dawn