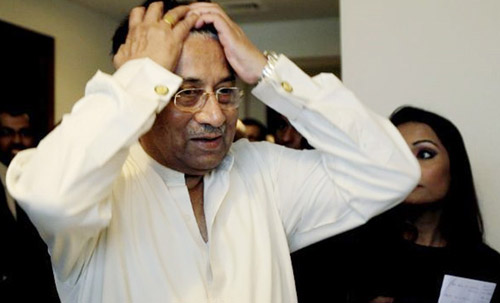 The top court on Monday dampened the excitement of former president Pervez Musharraf’s supporters as it suspended the Sindh High Court’s (SHC) June 12 verdict regarding removal of his name from Exit Control List (ECL).

The Supreme Court’s five-judge bench, headed by Justice Nasirul Mulk, granted leave over the federal government’s appeal against the SHC’s June 12 judgment. “The bench has granted leave to determine whether or not the principle of merger can be applied in this case. In view of this order, the name of Pervez Musharraf will remain on the ECL,” Musharraf’s counsel Chaudhry Faisal Hussain commented on the court’s short order. During the almost two-hour proceedings, Attorney General for Pakistan (AGP) Salman Aslam Butt presented the stance of the federal government while Barrister Farogh Nasim argued on behalf of Pervez Musharraf.

The Sindh High Court had ordered the government to remove Musharraf’s name from the ECL. However, it had also granted 15-day time in which federal government could file an appeal in the SC against the order. The bench questioned why the high court in its June 12 judgment did not reproduce the SC’s April 8, 2013 order, wherein interior secretary was directed to put name of former military ruler on the ECL. It observed that the top court’s order was relevant in this matter. “The main difficulty is that you did not file review petition against the apex court’s April 8, 2013 order for placing your client’s name on the ECL,” Justice Mian Saqib Nisar told the counsel for Musharraf. He asked how the high court could interpret the Supreme Court’s order in any matter.

Pervez Musharraf counsel Farogh Nasim said the top court on April 8, 2013 passed the order without giving the opportunity of hearing to his client.  However, the bench replied that this ground could have been argued in the review petition. The counsel contended that the top court had passed so many interim orders in different cases that it was not possible to approach the court against these orders. “The principle of merger should be applied in this matter,” he added. Justice Asif Saeed Khosa said there were four reasons why the name of Musharraf should not be removed from ECL. -tribune