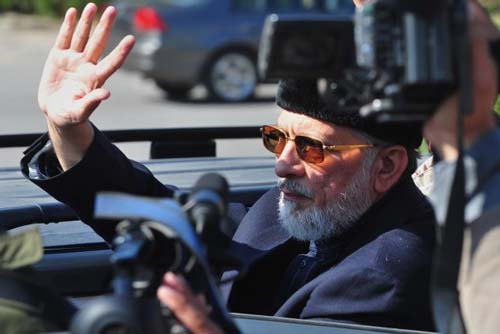 The plane carrying Minhaj-ul-Quran International patron-in-chief Dr. Tahir-ul-Qadri landed at Lahore airport after being diverted from Islamabad. Earlier, there were reports that the plane has been landed at Benazir Bhutto International Airport where thousands of his supporters are present to welcome the PAT chief.

Reports said the Emirates Airline issued wrong information about the flight landing. The plane kept on encircling the Islamabad airport for landing but Civil Aviation Authority (CAA) denied landing permission. Federal Interior Ministry says the flight was diverted owing to security concerns in Islamabad and Rawalpindi. The twin cities were sealed by the authorities.  Upon receiving news about the flight, PAT workers at Islamabad went on rampage. The baton-yielding activists vandalized several vehicles parked outside the airport and chased after riot policemen.

Earlier in the day, police fired tear gas shells on hundreds of supporters of Dr. Tahir-ul-Qadri outside the Islamabad airport. The anti-Taliban fiery preacher had announced to come back home to kick off campaign against what he called government’s corruption. Qadri, who sought army security on his arrival at Islamabad airport, had warned the government time and again against any crackdown on his party workers, but despite it, hundreds of his workers were arrested across Punjab. Various political parties, including MQM, PML-Q, APML and AML announced to support him in the anti-PML-N government campaign.  – SAMAA

Equipped with Humvees, ISIL Clashes With rivals in Syria