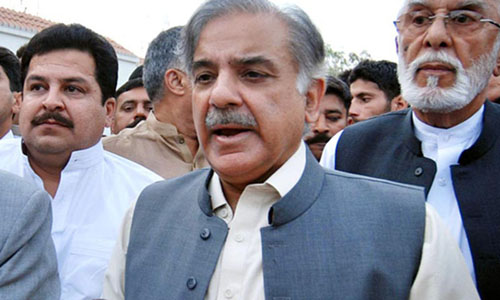 Shahbaz protests he was ‘out of the loop’

Punjab Chief Minister Shahbaz Sharif must have raised many an eyebrow even in the ruling PML-N on Thursday when he protested that he was out of the loop about the operation two days ago around the Minhajul Quran secretariat until TV channels started reporting on the clashes between police and workers of the Pakistan Awami Tehrik (PAT).

The chief minister had come to the capital to give his version of Tuesday’s bloodshed in Lahore in a meeting at the Prime Minister’s Office. According to a government official privy to the deliberations, Shahbaz Sharif said he first learned about the disturbance near the Minhajul Quran secretariat in Model Town at 8:30am. “He (Shahbaz) immediately ordered police to disengage,” the official said, recounting the proceedings.

“Soon after directing the police to disengage, I went to attend the oath-taking ceremony of the Chief Justice of Lahore High Court. During the ceremony I was informed that the situation was worsening. I again passed a message to police to back off.  “However, unfortunately police failed to implement my orders on time,” the official quoted the chief minister as telling a rapt audience, which included his elder brother, the prime minister. According to Shahbaz Sharif, Punjab police made two cardinal mistakes: one, no prior permission was sought from him; and two, automatic weapons were taken to the scene when there was no such need.

It was quite embarrassing for the younger Sharif, who over the years had earned a reputation of being a good administrator, to accept that such an important operation was planned, decided and carried out without his knowledge. “I will not spare anybody found involved in this situation which resulted in the loss of innocent lives people,” Mr Shahbaz promised to his elder brother. -dawn