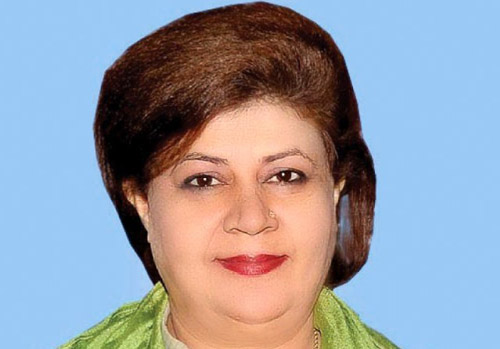 The National Assembly today (Friday) expressed grief and sorrow over the death of Muttahida Qaumi Movement (MQM) lawmaker Tahira Asif and sympathized with the bereaved family. The lawmakers have condemned the tragic firing incident in which she was injured and later succumbed to her injuries in Lahore.

The MPs paid tribute to Tahira Asif and said she greatly contributed to the proceedings of the House. Members of the National Assembly have demanded investigation into the incident and arrest of the culprits involved in this heinous crime. They stressed the need to root out terrorism from the society for establishment of peace. They said, all parties, military leadership and religious leaders should sit together to formulate a strategy in this regard.

Those who spoke on the occasion were; opposition leader Syed Khursheed Shah, Sheikh Salahuddin, Makhdoom Shah Mahmood Qureshi, Sheikh Rashid Ahmed, Mahmood Khan Achakzai, Sahibzada Tariqullah and Shahida Akhtar Ali. Minister for Defence Production Rana Tanveer Hussain assured the House on behalf of the Federal and Punjab governments that immediate investigations will be carried out into the incident. He said the culprits involved in this crime will be arrested and brought to justice.

Later the House was adjourned without transacting any business to meet again on Saturday morning at 9:30. Tahira Asif was attacked by unknown gunmen in Lahore’s Allama Iqbal Town on Wednesday. She was immediately shifted to Sheikh Zaid Hospital for treatment. According to doctors, four bullets pierced her body and she was on ventilator after the surgery.  She is survived by her husband, two sons and one daughter. Her funeral prayers will be offered in Federal Colony after the Friday prayers. -dunyanews