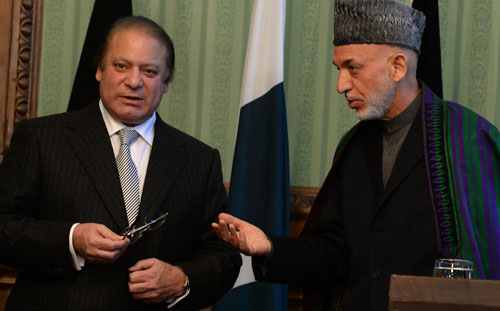 He said it was a follow-up call by President Hamid Karzai after the visit of special envoy Mehmood Khan Achakzai to Kabul on Tuesday. During his visit, Mr Achakzai discussed the security situation with the Afghan leader. The call from Mr Karzai is significant as it has come at a time when Pakistani forces are carrying out an operation in a tribal region close to the Pak-Afghan border. On Wednesday, Afghan Ambassador Janan Mosazai met Chief of Army Staff Gen Raheel Sharif at GHQ and discussed with him the military operation in North Waziristan.

Pakistan has beefed up security along the border with Afghanistan to stop terrorists from fleeing the area. It has urged the Afghan government to seal the border on their side. Meanwhile, Foreign Office spokesperson Tasneem Aslam said at a weekly briefing on Thursday that Afghanistan had assured its full support to Operation Zarb-i-Azb. She said that civil and military leadership of the country had contacted Afghan authorities on the issue. About the US drone strikes,

She said such attacks were violation of international laws and therefore the US had been informed of Pakistan’s concern on them. In reply to a question about the situation in Iraq, she said all Pakistanis in that country are safe. About Tehreek-i-Minhajul Quran’s chief Tahirul Qadri’s planned visit to Pakistan, the spokesperson said: “Mr Tahirul Qadri is a Pakistani national and international laws do not apply on his arrival in the country.”  -dawn

John Kerry Expected to Travel to Iraq ‘Soon’: US Sources

John Kerry Expected to Travel to Iraq 'Soon': US Sources