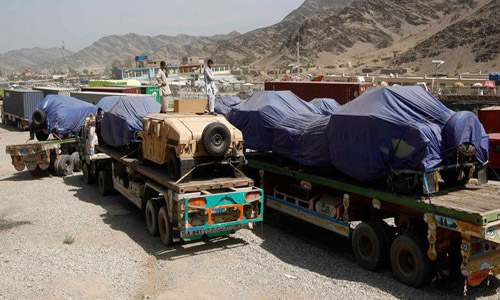 A number of vehicles were destroyed on Thursday when unidentified men attacked a terminal near the Pak-Afghan border from where Nato supply trucks cross. Subsequently, the Torkham crossing was closed for traffic and security was beefed up in the area.

The attack comes days after the Pakistani military launched a full-scale military operation in the North Waziristan tribal region which has been regarded as a haven for militants from various groups, including the ones orchestrating attacks on government and US interests in Afghanistan. No group has admitted responsibility but the Taliban have in the past claimed such attacks to disrupt supplies for the US-led international troops fighting in Afghanistan.