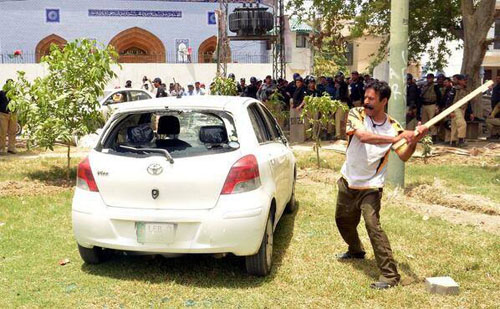 A Pakistan Muslim League – Nawaz (PML-N) activist, who was found damaging a number of vehicles in yesterday’s clash between Pakistan Awami Tehreek (PAT) and police personnel in Lahore’s Model Town, was arrested late on Tuesday.

On Tuesday, TV cameras had captured a man damaging vehicles in Model Town Lahore in the presence of police. The man was later identified as Gullu Butt alias Sher-i-Lahore, known to be a police tout in Model Town. According to CCPO Chaudhary Shafeeq Gujjar, Gullu Butt was arrested on Tuesday night. Earlier, Butt was said to have been an office-bearer of ruling PML-N. PML-N’s Pervaiz Malik admitted that the the culprit was their party activist but did not endorse his actions. However, Punjab Chief Minister Shahbaz Sharif had directed the inspector general of police for Butt’s immediate arrest.

Yesterday, an anti-encroachment drive was conducted by a contingent of police personnel in order to remove the barrier outside Pakistan Awami Tehreek’s (PAT) Chief Tahirul Qadri’s Lahore residence. Upon receiving resistance by Qadri’s supporters, police baton-charged and fired shots at the protesters who in turn began to hurl rocks at them. A violent clash erupted between the police personnel and PAT supporters that killed at least seven people including women. A number of vehicles were also damaged during the skirmish. -dawn