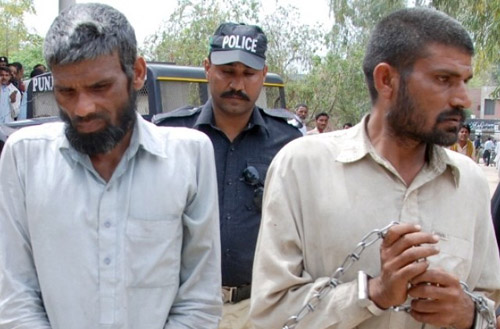 An anti-terrorism court in Sargodha has sentenced the infamous ‘Bhakkar cannibals’ to 12 years of imprisonment on Tuesday. Two brothers, Arif and Farman, from Darya Khan in Bhakkar district, who were first arrested for eating human flesh in April 2011, were re-arrested in April this year on the same charges.

Police arrested Arif when the head of a toddler was recovered from their home in Kahawar Kalan town near Darya Khan. Arif confessed to having cooked and eaten the rest of the body, while his brother Farman managed to flee but was later apprehended as well. It was reported that the brothers had dug up and devoured up to 150 bodies from the graveyard before they were finally caught. The brothers were previously sentenced to two years imprisonment after they were found to have disinterred corpses in the local graveyard for the purpose of eating them. However, they were released after serving a year-long prison term. -tribune