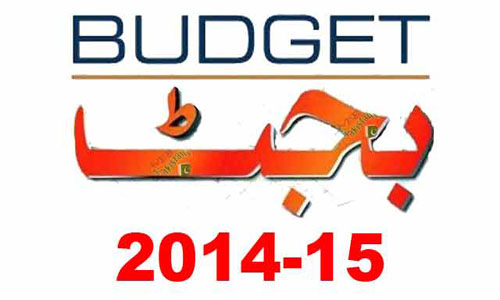 The Finance Minister Ishaq Dar presented a federal budget 2014-15 with a total outlay of Rs 3.945 trillion in the National Assembly today.

Following are the salient features of the budget 2014-15

-Economic Growth has been projected at 4.14%, the highest growth in the last six years.

-Inflation Rate stands at 8.6% compared to 12.6% in previous regime

-Imports were recorded at $37.1 billion during Jul-Apr 2013-14 compared to $36.7 billion last year and showing a marginal growth of 1.2%. However, imports of machinery have increased by an impressive 11% an indication of investment activity.

–Foreign Exchange Reserves, which had declined to a precarious level when in June 2013 SBP they stood at $6 billion, of which $2 billion were due to a swap that was payable in August.

–Auction of Spectrum License:Anothernotable achievement of our government is the successful auction of radio spectrum license of 3G and 4G.

–Creating New Jobs: A detailed study on the impact of 3G-4G technology on employment has estimated some 900,000 jobs will be created in the next four years.

–Protecting the Poor: Benazir Income Support Program allocation increased to Rs 118 billion. Monthly stipend under the program will now be Rs 1500 per month.

-Prime Minister’s ICT Scholarship Program: Rs.125 million have been allocated out of National ICT R&D Fund to provide 500 scholarships in a transparent manner.

-Water: Rs.42 billion allocated for projects in various parts of the country.

-Human Development: An allocation of Rs.20 billion for 188 projects of the Higher Education Commission.

-Agriculture: National Food Security Council has been established. The council will be responsible for ensuring policy coordination across provinces and relating to productivity improvements, market reforms, value addition and prices that ensure stable incomes for farmers.