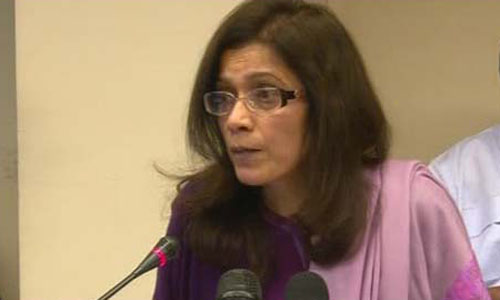 Nargis Sethi, once dubbed Pakistan’s most powerful woman, is back in the limelight. She will now be a key part of the government team that is responsible for reining in loadshedding, as the new secretary of the Ministry of Water and Power.

Prime Minister Nawaz Sharif decided to make the appointment over the weekend, inducting her into a top-level team that includes Punjab Chief Minister Shahbaz Sharif, Federal Minister Khawaja Asif, Minister of State Abid Sher Ali, a parliamentary secretary and a special adviser. Before her latest assignment, Ms Sethi had been working as the secretary for the Economic Affairs Division, which now will be run by her husband Saleem Sethi, a grade 22 officer with the Secretariat Group. Mr Sethi previously represented Pakistan at the International Monetary Fund’s head offices in Washington. Saifullah Chattha, the additional secretary in charge of the Ministry of Water and Power before Ms Sethi’s appointment, has been transferred to the Ministry of Human Resource Development.

Nargis Sethi, who is a DMG officer, had closely worked with the government of the Pakistan People’s Party. She rose to fame when she was famously called the ‘Condo leezza Rice of Pakistan’ by former prime minister Syed Yousuf Raza Gilani. Ms Sethi served Mr Gilani as principal secretary for nearly three years before going on to manage the all-important Cabinet Division. Under Raja Pervaiz Ashraf, she held the additional charge of the Ministry of Water and Power for a few months, where she is said to have done a good job. Soon after the PML-N took power, Ms Sethi’s name was suggested to the Sharifs to fill an important post, but her longstanding association with the PPP is said to have worked to her disadvantage, a source privy to the development. -dawn

But her satisfactory performance as the boss of the Pakistan Power Park Management Company earned Ms Sethi her new assignment, the official said. The power company is used as a one-window facilitator to promote private sector participation in the power sector, which the government is counting on to generate over 6,000 megawatts through power plants at Gadani in Balochistan. Many are asking why the government took so long to appoint Ms Sethi to this key post, especially since she is due to retire by the end of the current year. However, an aide of the prime minister told Dawn that her superannuation was not an issue and that her services could be retained if she performed well, “The prime minister is personally involved in managing the power sector and he must take every aspect into account before selecting someone for this important assignment”. -dawn