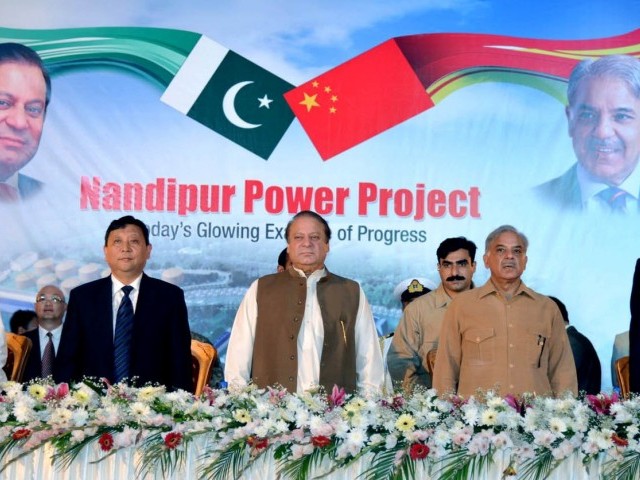 Prime Minister Nawaz Sharif inaugurated the first turbine of the Nandipur Power Project in Gujranwala on Saturday, The turbine will add 95 megawatts to the national power grid. Punjab Chief Minister Shahbaz Sharif, Federal Minister for Water and Power Khawaja Asif, and chairperson of the China-based company Dang Fing Electric Corporation, which was awarded the contract for the project, were also present at the occasion.

While addressing the inauguration ceremony, the Punjab chief minister criticised the previous government for stalling the project. He said the power project’s history is an unfortunate one since machinery for the project was rotting at the Karachi Port for three years. “If the project had been completed three years earlier than the country would not have suffered a financial loss worth Rs165 billion,” remarked Shahbaz Sharif. Expressing similar views to his brother, Nawaz said negligence by the previous government with regards to the Nandipur project was “an unforgivable sin.”

Referring to people who were protesting against development work carried out by the PML-N government, the premier Nawaz Sharif said such people should instead extend a helping hand and stop becoming a hindrance. “They should see that the government is building Pakistan again,” he added. At the end of his speech, he announced a three-month bonus for the team who worked on the Nandipur project from the federal government as well as another three-month bonus from the Punjab government on behalf of the Punjab chief minister Shahbaz Sharif.

It is a combined cycle thermal power plant which is built in Nandipur, Gujranwala. If run on furnace oil it will produce 425MW of electricity while with gas it will produce 525MW and by the end of the year it will be completely operational. In January 2008, Pakistan Electric Power Company (Pepco) signed a Rs23 billion contract with China-based company Dang Fing Electric Corporation for the construction of the project. In the middle of the 2010, the project was in its final stages of completion, expected in April 2011. However, the PPP government misplaced the summary documents of the project and the summary was ignored for two years. Consequently, the machinery worth $85 million kept lying at the Karachi port. In September, 2012, the Chinese firm, canceled the contract of the Nandipur Project, saying that they had faced huge financial loss due to the unnecessary delay in collection of the machinery as it has started to rust at the port.

The company also demanded $40 million as compensation. Soon after coming to power in May 2013, the PML-N government re-started negotiation with the Chinese firm in order to kick start the Nandipur Project. After a few days of discussions, the company agreed to help complete the project. One July 8, 2013, Chinese engineers arrived at Karachi port to examine machinery and arrangements were made to complete the project.  Some more machinery was bought while damaged and rusted machinery was fixed immediately. According to estimates, the cost of the project which was Rs23 billion, increased to Rs57.38 billion due to unnecessary delay. -tribune