Six Children Drown Saving One Another 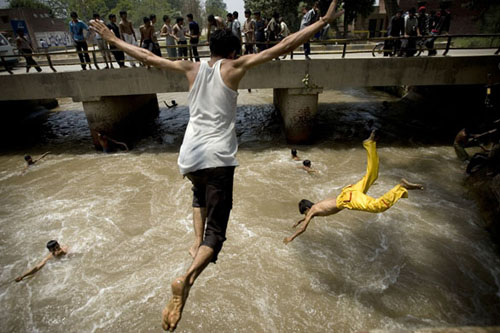 Six children drown saving one another

Six children, among them two sisters and two brothers, drowned in the Rice Canal and a pond in separate incidents on Thursday when they slipped into deep waters while taking a dip in a bid to take a respite from the extreme heat.

Three children identified as Alisha, 7, Rimsha Jiskani, 6, (sisters) and their cousin Saima Jiskani, 8, drowned saving one another when they slipped into deep waters while taking a bath in the Rice Canal near Bazigar Bridge, said eyewitnesses. The children lived in nearby New Nazar Mohalla on the bank of the canal. Their bodies were taken out by neighbours and shifted to their homes.

In another tragic incident, three small children identified as Sardar Ali Magsi, 6, Sheraz Ali Magsi, 7 (brothers), and Baggan Magsi, 8, drowned while taking a bath in a pond in Sharif Magsi village in Qambar-Shahdadkot district late on Wednesday evening. They had gone to attend a wedding ceremony in Buthi village, 40 kilometres from their village, without informing their parents and decided to take a bath in the pond while returning to the village, said villagers. The villagers later took out the children’s bodies. Qambar-Shahdadkot Deputy Commissioner Asad Abro and PPP leader Ghulam Haidar Khokhar visited the bereaved family and offered condolences. –dawn