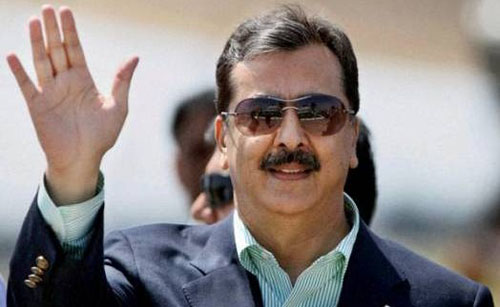 Gilani lamented that no case in the country is thought to be ‘complete’ without implicating him in it. “Whether it is about OGRA or NICL, TADP or Hajj scandal, my name is a must,” he wondered, and added that ironically 8004 beneficiaries of the NRO had been exonerated while he was still facing the music, even being a non-beneficiary.
The former prime minister said the government had sent notices to only him and his spouse for keeping money in offshore bank accounts. “I ask the government if it’s only me and my wife in this country of 180 million people who have …if really we have… the money in offshore accounts?” he asked.

“These are classic examples of selective justice in our country.” Yousaf Raza Gilani said he respects courts and will appear in the court in Karachi in TDAP case. “I will also appear in the accountability court in Islamabad on June 4 in OGRA scandal,” he said, and maintained that if only the competent appointing authority is to be held responsible for every ill then it is going to open a new Pandora’s box in the country. The former prime minister ‘advised’ the government to bring out all what they can against him and his family in one go to spare them of the trouble of ‘double jeopardy’. “Just do your homework first and bring everything in one go.” Gilani said his sons too have been implicated in the ‘fabricated’ and ‘politically motivated’ cases.

“They have not spared even my family,” he said, and added that his other son is in the custody of kidnappers for the last one year. “No one can feel the extent of torture me and my family are going through.”The former prime minister asked the government to avoid crossing the limits of victimization of him and his family. “Do as much as you can bear on your turn,” he cautioned. Gilani said the rulers can’t tolerate even a fraction of what he and his family is going through. “They don’t have the stomach for that.” –dailytimes