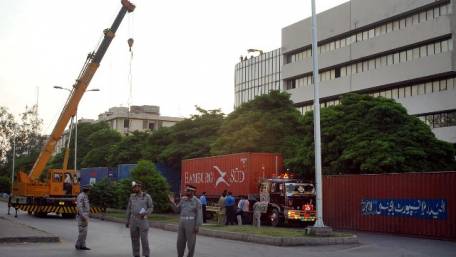 ISLAMABAD – The Pakistan Electronic Media Regulatory Authority (PEMRA) has announced that it has suspended licenses of group of private TV channels Geo News, Geo Entertainment and Geo Tez till May 28, TV channels reported on Tuesday.

Speaking to journalists after holding meetings, PEMRA members said that they were an independent entity and would make decisions as such. “PEMRA is an independent organisation, and it would have been better if a government representative attended today’s meeting as well and help us come up with a decision,” a channel quoted PEMRA official as saying.

PEMRA member Mian Shams said the government representatives did not show up for the meeting which was attended by only five private members. The official said that the recommendation has been sent to the CoC and their recommendations were expected to be returned in a week time.

After receiving the recommendations, a special committee will be formed to make a final decision regarding Geo’s licenses, the channel reported. According to the watchdog, it has received more than 5000 complaints against the private channel.