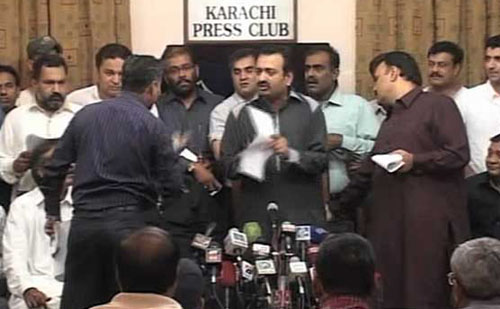 A reporter from Jang Group on Friday interrupted the Cable Operators Association (COA) press conference in Karachi shortly after it commenced. Chairman COA, Khalid Arain had begun the press conference when the reporter levelled allegations against COA for suspending transmission of Geo TV across Pakistan.

The allegations led to an exchange of hot words and the press conference was suspended. The scuffle went on for quite sometime until the cable operators’ delegation left the press conference in protest. Arain, speaking to media persons outside the Karachi press club said that the media group had sent around 18 reporters for the purpose of causing trouble in the press conference. He said the cable operators were subjected to verbal as well as physical abuse by the Jang group reporters, adding that the media group has abused media freedom. G.M Jamali; president of Karachi Union of Journalists, Rana Azeem; president of Pakistan Federal Union of Journalists and other media groups strongly condemned the event. PFUJ has announced that it would suspend the membership of the media group reporters involved in the incident.