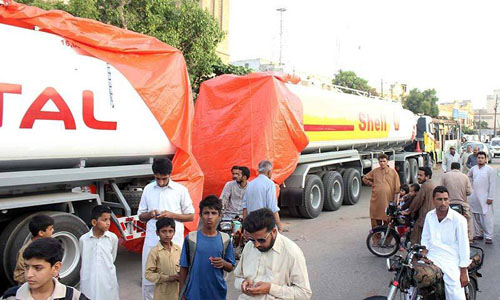 People gather near oil tankers after blast due to gas in a tanker on Maripur Road.

A magnetic bomb was defused by the Bomb Disposal Squad (BDS) on Wednesday in the Keamari Oil terminal of Karachi. On receiving a tip-off about the presence of a bomb in the area, the locals called in a BDS team.

The BDS team after inspection, evacuated the area and destroyed the bomb by letting it explode. According to police, the bomb weighed nearly one kilogram and was planted with an improvised explosive device (IED) device. A day earlier a blast occurred in an oil tanker in Mauripur area as a result of which three people were injured. Also an explosion occurred in two oil tankers in Keamari oil terminal however no casualties were reported. -dawn