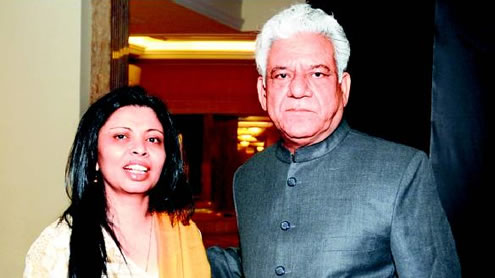 Veteran actor Om Puri’s personal life made headlines last year as his marriage to Nandita Puri crumbled amidst claims of domestic violence and a rekindled romance with his first wife Seema Kapoor.

While Seema had denied the allegations made by Nandita, Mirror has it that she joined Om during his recent trip to Pakistan, where he performed the Punjabi play Teri Amrita costarring Divya Dutta. Buzz is, the former couple also shared a suite in Avari Hotel, a luxury property in Lahore.

When contacted Seema told us that she had indeed been in the city, but for the screening of her film Haat -The Weekly Baazar’s screening. “I was definitely in Lahore. But I was there for my film’s screening and I stayed with a friend,” said Seema. When asked whether she and her ex-husband returned together from Lahore, she replied, “Please don’t ask me such questions.”

However, a hotel employee at Avari confirmed that Om Puri and Seema Kapoor had indeed stayed at their hotel for as many as five days. Another employee from the same hotel, Ali, added, “Om booked a suite under his name. He was staying with his wife Seema (note how he doesn’t refer to her as Om’s ex-wife). The suite has two rooms, which were interconnected.”

Meanwhile, a source close to Om told Mirror that the actor had called up his son Ishaan from Lahore and told him that he was in Chandigarh for work. In an earlier interview with Mirror (August 28, 2013), Om had categorically stated, “ Yes. I would like to live with Seema, I like her. But if that happens, it would happen only when I have legally parted ways with Nandita.”

The 65-year-old actor and his second wife Nandita Puri have not yet been granted divorce. When contacted, Om endorsed Seema’s statement that she had stayed with a friend. But when told that the hotel had confirmed their stay, he replied, “Fine. Please go ahead and print whatever they say. I am with a doctor and am too unwell to speak anymore.”

Electric Car’s biggest Threat may be its Battery