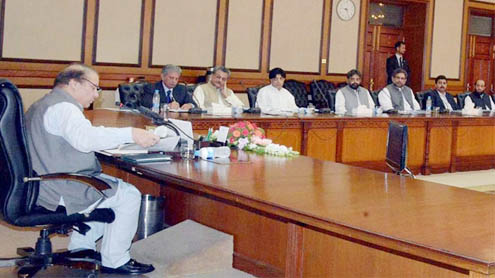 ISLAMABAD: Pakistan’s federal cabinet on Friday approved a draft of amendments to anti-terrorism laws in an effort to further empowering law enforcement agencies for better handling of terror-related cases.

Federal minister Zahid Hamid presented the draft amendments in the session of federal cabinet which was chaired by Prime Minister Nawaz Sharif.The draft bill, which will later be presented before the Parliament for approval, is aimed at curbing the menace of terrorism and giving special powers to security forces. It also provides ensuring protection of witnesses in terrorism cases.

The draft amendment bill includes recommendations of the Cabinet committee formed on September 04, 2013 meeting of the federal cabinet at Karachi.The Committee was headed by Federal Minister Zahid Hamid and comprised Special Assistant to the Prime Minister Kh. Zaheer Ahmed, Prosecutor General Sindh and Senator Farogh Naseem.The draft bill provides for law enforcing agencies the powers of preventive detention up to three months for any person concerned in any offence under the Anti-Terrorism Act relating to security or defence of Pakistan, public order relating to target killing, kidnapping for ransom and extortion.

The draft amendment also provides for protection of witnesses, judges and prosecutors.The measures also include: using screens to shield witnesses, judges and prosecutors from public view; trial in jail premises or through video link; investigation and trial in another province and ensuring no access to mobile phones for prisoners in jail.The proposed bill further includes measures for expeditious disposal of cases and to avoid unnecessary delays in the courts.

The meeting recommended inclusion in the proposed bill that Rangers after prior warning as considered necessary against persons committing a terrorist or scheduled offence would be authorised to shoot or order to shoot before they are fired upon as provided under the existing law.Emphasising on the law and order situation prevailing in Karachi, the Prime Minister said that it is the responsibility of the Government to provide security of life and property to all citizens of the country.

He said that the situation in Karachi calls for strict measures in order to restore peace in the commercial hub of the country. He observed that the ongoing Karachi operation has brought good results and that the common man has expressed satisfaction over the improvement of law and order situation.The prime minister also asked the federal government to extend all possible cooperation to Sindh government to improve law and order situation in the country’s business hub. – Dawn