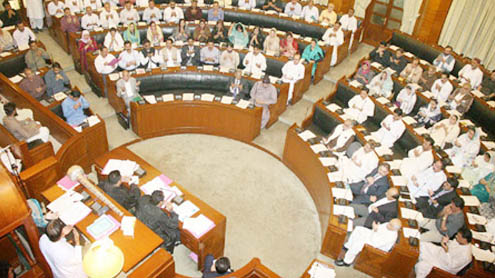 KARACHI: Sindh Assembly on Wednesday unanimously passed Sindh Witness Protection Bill ‘to encourage and protect witnesses and their families’ who appear during investigation in trial of cases of heinous crimes and terrorism.

Provincial Minister for Parliamentary Affairs, Dr Sikandar Mandhro, presented the bill which was supported by all other political parties including the MQM, PML-F, PML-N and PTI. The witnesses will also be provided protection in cases of treason, sedition, murder, rape, public violence, kidnapping and others.According to the bill, the government will establish a Witness Protection Programme for guarding the witnesses. Under the programme witnesses will be allowed to establish a new identity, conceal their original identity by wearing a mask, change voice and appearance during the investigation or trial of cases.

The witnesses will also be allowed video conferencing, relocation from one place to another by providing them accommodation, transport and financial assistance. Heirs will be given compensation if a witness is killed, besides free education to their children or dependents will also be ensured.The government will also establish Witness Protection Advisory Board to be headed by secretary Home Department, Sindh. Secretaries of Law and Finance departments, advocate general Sindh, inspector general police Sindh, prosecutor general Sindh, a representative of provincial commission on Human Rights and other officers will be members of the board.

The unit will be headed by additional inspector general police who will act as chief witness protection officer (CWPO).The unit will provide framework and procedure for giving protection on behalf of the State to persons in possession of important information who are facing potential risk, threat or intimidation due to providing evidence on behalf of the State.The CWPO will be responsible to decide inclusion of a witness in the programme. He will evaluate seriousness of the offence to which the statement or evidence of witness relates, besides nature and importance, perceived danger, relationship of a witness and other pertaining matters.

A witness will not be included in the programme unless a person agrees in writing to be included in it.Later talking to journalists, Sindh Information Minister Sharjeel Inam said the bill would help judiciary in awarding punishments to criminals. He said law enforcement agencies had been given a free hand to take action against criminals, extortionists and target killers.Six resolutions passed: The house also passed six different resolutions on first day proceedings of the current session. Those include a resolution against a conspiracy to divide Sindh province. Khairun-Nisa Mughal and other lawmakers of the PPP had moved the resolution. It condemned the ‘conspiracy of new province in Sindh’.

Another resolution was moved by MQM’s Muhammad Dilawar Qureshi and others to felicitate the party chief Altaf Hussain on his birthday. Another resolution moved by PPP’s Sharmila Farooqi and others demanded the Sindh government to ban extra ordinary expenses in marriages and enforsing single-course meal in marriage ceremonies.An additional resolution moved by MQM’s Irum Azim Farooq and others condemned incidents of rape with minor girls in the country and demanded governments to ensure exemplary action against culprits involved in such heinous crimes. The house condemned assassination of military officers during a recent attack by the Taliban and expressed sympathies with the grieved families.

MQM’s adjournment motion: Deputy Speaker, Shehla Raza disposed of adjournment motion of MQM lawmakers regarding arrest of former party MPA, Nadeem Hashmi. The movers did not press it after the release of Hashmi.MQM leader, Khuwaja Izharul Hassan thanked the Sindh Chief Minister Syed Qaim Ali Shah for ensuring impartial inquiry of this case. Sharjeel Inam Memon, however, made it clear that Hashmi had been released after inquiry of Joint Investigation Team. He said the release of Hashmi had proved that no specific party was being targeted in Karachi operation.

He said law enforcement agencies had raided a house of PPP MNA in Lyari despite that he was in jail. He hastened to add that the PPP did not issue any statement in this regard. “But the way entire city was shut down on arrest of Hashmi should not recur in future,” stated Sharjeel.Special committee formed: The house constituted a special committee to be headed by Senior Minister for Education and Literacy, Nisar Ahmed Khuhro to probe into firing incident of a Naval commander in Karachi. Syed Ali Mardan Shah, Dost Muhammd Rahimoon, Panjo Mal and Khurrum Sher Ali will be members of the committee.

Media advertisements: Sharjeel Inam Memon asked office bearers of All Pakistan Newspapers Society (APNS) to deal with distribution of government advertisements among newspapers.Speaking during the question hour session, Memon said he had already given such an offer to the APNS office bearers during their meeting with him. However, he added a reply in this regard is yet to be received.

He said the Information Department will make public advertisements being given to print and electronic media through its website on a daily basis. He also appealed the APNS to open its membership for small newspapers.“MQM leader Nadeem Hashmi has been released after inquiry of Joint Investigation Team. His release has proved that no specific party is being targeted in Karachi operation. The way the entire city was shut down on arrest of Hashmi should not happen in future” – DailyTimes