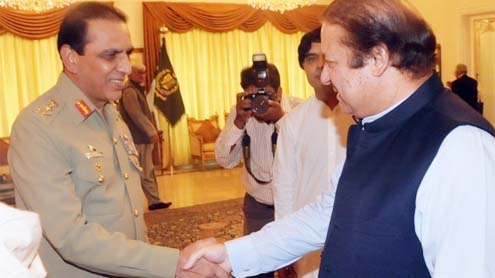 The prime minister and the army chief discussed implementation of the APC resolution and deliberated upon national security matters with special focus on talks with Taliban, said the PM’s media office.The PM and the COAS also exchanged notes over the process and strategy to initiate the dialogue process with militants, sources told Media.

The participants at the APC had agreed that talks should be held with militants as a measure to tackle terrorism in Pakistan.It was the prime minister’s note that Jamiat Ulema-e-Islam-Fazl (JUI-F) chief Maulana Fazl-ur-Rehman could be taken aboard as a facilitator to begin the talks.The army chief, however, noted that all prominent religious leaders should be consulted, particularly those having close contacts with Taliban leadership, adding that the intelligence agencies were ready to facilitate in this regard.

The COAS said this while referring to the key role of Maulana Sami-ul-Haq, who is also known as ‘the father of Taliban’.It should be noted that Maulana Sami’s Jamiat Ulema-e-Islam-Sami (JUI-S) had not been invited in the APC. His party featured nowhere in the government’s plans of initiating dialogue with the Pakistani Taliban.Earlier, the PML-N government did invite Sami for facilitating the government’s intended peace negotiations but after receiving JUI-F chief‘s reservations, the government removed Sami-ul-Haq’s party from its preferred list of facilitators for talks with the militant outfit.

Nawaz was of the view that every development should be shared with the nation to keep them updated at state level to avoid misunderstandings and rumour-mongering.In the APC it had been emphasised that there was complete harmony between civilian and military leadership and the two were on the same page over the security and sovereignty of the country. – TheExpressTribune

From legends to upstarts, panoply of style at New York Fashion Week