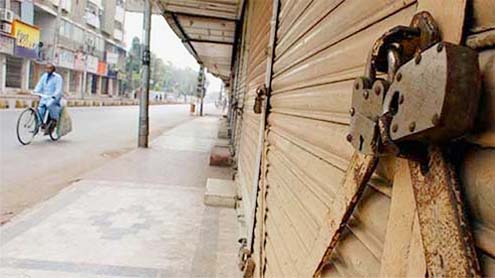 KARACHI: Muttahida Qaumi Movement chief Altaf Hussain condemned the arrest of a former provincial legislator belonging to the party, Nadeem Hashmi, whereas a shutdown was observed in Karachi and in some areas of Hyderabad on Wednesday, Media reported.

In a statement issued from the MQM’s London secretariat, Altaf claimed that the Sindh government was conducting one-sided action against the MQM office bearers and activists and asked the provincial government to explain the reasons and clauses of the law under which the former Member of Provincial Assembly was taken into custody by law enforcers.The MQM chief further said that he had always advised his party workers to remain calm and patient and appealed for the same today.

Altaf Hussain’s statement concluded with the remarks that he had handed over the responsibilty, for the resolution of issues faced by party, its workers and citizens at large, to the members of the Rabita committee and the Tanzeemi (organising) sector, according to the MQM’s official website.The MQM chief said that those given the responsibility were completely independant in making their decisions and he hoped that they would make their deicions with complete honesty while remaining withing the parametres of party discipline, the statement added.

An emergency session of the MQM’s Rabita (coordination) committee was also held at the party’s London and Karachi headquarters to decide the further course of action to be taken over the arrest of party members.Nadeem Hashmi was arrested late on Tuesday over suspected involvement in the murders of two policemen in Karachi’s North Nazimabad area and was subsequently shifted to the Pirabad police station.Reports say Hashmi is accused of firing on a police mobile in Karachi’s Haideri area on Tuesday in which the two policemen were killed.

Federal Information MInister Pervez Rasheed said chief minister Sindh was supervising the operation in Karachi.He further said that all parties including the Pakistan Peopls Party (PPP), Pakistan Tehrik-i-Insaaf (PTI) and the MQM were consulted over the Karachi issue and that all steps taken in the city were with the consensus of all parties.Rasheed added that certain decisions were made which had to be implemented.

Earlier on Wednesday, Sindh Assembly’s deputy opposition leader belonging to the MQM, Khwaja Izharul Hasan, along with several other party members reached the Pirabad police station to inquire about the details regarding the arrest of their colleague.Hasan alleged that instead of targeting criminal elements, the operation was being conducted against the MQM and requested Chief Justice of Pakistan Justice Iftikhar Muhammad Chaudhry, Prime Minister Mian Muhammad Nawaz Sharif and Federal Interior Minister Chaudhry Nisar Ali Khan to take notice of the incident.He further said that the party was being punished for demanding the handing over of Karachi’s administration to the Army and that the MQM was not against conducting of targeted operation.Izhar also claimed that the arrest of ‘innocent’ workers had raised questions over the neutrality of the operation.

Tension engulfed the city as markets, businesses, shops and fuel stations shut down in several areas after the arrest of the former lawmaker was reported on tv news channels.Public transport and traffic remained sparse on roads. Moreover, Karachi Transport Ittehad declared that buses would remain off the roads.The All Private School Management Association (APSMA) announced a closure of all private schools in Karachi and students were returned to their homes.

Academic and administrative activities at the Sindh Madrasa-tul-Islam, Karachi University and Federal Urdu University stood suspended and all exams scheduled for the day were announced as postponed. The next date of examinations would be announced later.Meanwhile, two persons were killed in separate incidents of gun-related violence in Malir and Abul Hassan Ispahani road areas of the city.Moreover, a vehicle was torched near Nasir Jump area in Karachi’s Korangi locality.

Another vehicle was set on fire near Rabia City in Gulistan-i-Jauhar area of Karachi whereas a truck was set alight near Two-Minute Chowrangi in Karachi’s North Karachi area.Similarly the situation in Sindh’s Hyderabad city also tenured tense as markets, shops and schools partially closed down in the city.Rangers personnel patrolled the streets of Hyderabad and engaged in checking of vehicles and pedestrians in the city. – Dawn