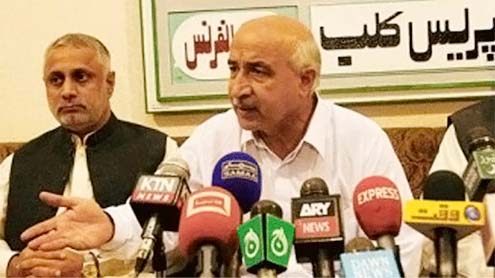 QUETTA: Balochistan Chief Minister Dr Abdul Malik Baloch has warned that he would not allow security checkposts to be used for collecting extortion money in the province.

Speaking at a meeting in Gwadar on Sunday where he was informed about difficulties faced by police in training on modern lines, he said there were reports that check posts set up by police and other security forces in Makran and other areas of the province had been forcing people travelling by bus or private vehicles on national highways and other roads to pay money.

“We will not allow personnel of police and other security forces to extort money at check posts in any area,” he said.Check posts, he added, would be there but only to provide security to people.Dr Malik said he had ordered the authorities concerned to abolish all unnecessary check posts on highways and roads.He said his government would introduce reforms to improve the strength and effectiveness of police force and use all resources for their advanced training.The chief minister said equipment, including modern weapons, armoured personnel carriers and vehicles, would be given to Makran police.

He said complexes for police training would be set up in Turbat, Gwadar and Panjgur districts. Bomb disposal squads would also be set up there.Dr Malik said that reforms would also be introduced to change ‘police culture’ and end corruption.“We want to make police a modern force which can cope with any situation,” he said.The chief minister said efforts would be made to regularise border trade with Iran.Mozzum Jah, Deputy Inspector General of Police, Makran Range, briefed the meeting on the law and order situation and requirement of police force in Makran division. – Dawn