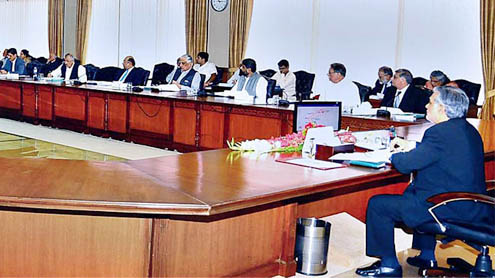 In order to streamline the procedure of approval of projects by  ECNEC, the Finance Minister directed the Planning and Development Ministry to present projects approved by Central Development Working Party (CDWP) within seven days.The ECNEC further directed the Planning and Development Department to come up with an integrated plan for need of transmission lines for evacuation of electricity planned to be generated by 6600MW thermal plants at Gadani, 1200MW from Jamshoro, 2017MW Karachi Coastal Power Plants and other upcoming projects. The meeting was also informed that 90% work on Dera Ghazi  Khan-Loralai transmission line has been completed while 70% work on Dadu-Khuzdar transmission has also been completed.

A grid station in Dera Ghazi Khan would be completed by April 14 next year, the ECNEC was told.Deferring the discussion on Kachhi Canal Project Phase I, the  ECNEC constituted a committee headed by Deputy Chairman Planning Commission with Federal Secretary Planning and Development, Chief Secretary Balochistan,  Chairman WAPDA, Advisor Finance Ministry and Secretary Irrigation, Government of Punjab as its members.

The ECNEC authorized the Chairman to co-opt any member.  This committee will look into causes of delay in the Kachhi Canal  Project and suggest a way forward in its report, to the next meeting of  the ECNEC, so that it can be completed expeditiously It was also decided that the next meeting of the ECNEC would be held  before the end of next week.It was also decided that the projects fully funded by the provinces should be fast tracked and submitted to the ECNEC on priority basis.