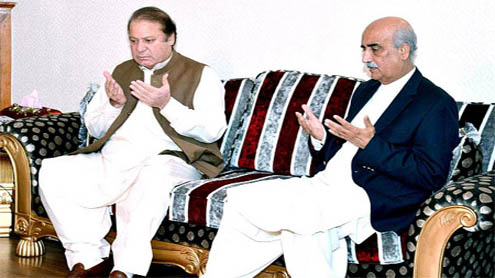 Both the leaders agreed on giving new names when premier visited opposition leader at his residence to condole the death of his sister. Both sides also agreed to drop the names of Justice (retd) Bhagwandas and Khawja Zaheer Ahmed.

It may be recalled the name of Bhagwandas was given by Opposition Leader Khrusheed Shah and Prime Minister Nawaz Sharif forwarded the name of Khawja Zaheer for NAB chief apart from the other two names Justice (retd) Rahmat Hussain Jafari and Justice (retd) Sardar Raza from government and opposition sides, respectively.After the meeting, Shah told the media that he and prime minister agreed to deliberate on new names to replace Bhagwandas and Khawja Zaheer Ahmed.

However, both the officials declined to accept the responsibility of NAB chief even after government apparently agreed to accept the name of Bhagwandas for NAB chief. Shah told the media that considerable delay had been caused and now the name should be finalised for NAB chief.Talking about chief election commissioner, opposition leader said the government and opposition would also try to install new CEC with consensus and would not make it a matter of ego.About session of National Assembly, which is scheduled to end on Friday (today), Shah disclosed that it would not go on for another week and prime minister agreed to start the debate on presidential address in the session. – DailyTimes