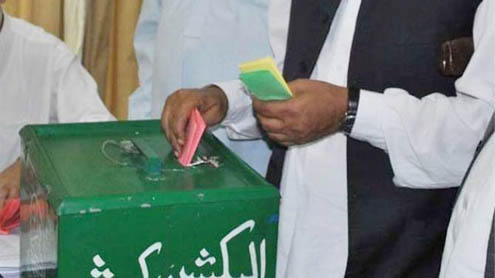 LAHORE:The unofficial results of the by-elections to Punjab have upset the previous position held by main political rivals which shows a major change in the voters trends, although they showed a low turnout on the polling day on Thursday.

The PML-N, PTI and PPP somewhat secured their respective tally till the filing of this report. They were capturing two to three seats of each others.Interestingly, the PTI lost the seat vacated by the party chief Imran Khan in NA-71 Mianwali, the PML-N lost the seat vacated by Chief Minister Shahbaz Sharif in PP-247 Rajanpur and another by PML-N stalwart Sardar Zulfiqar Ali Khan Khosa in PP-243 Dera Ghazi Khan, and by PML-Q’s Moonis Elahi in PP-118 Mandi Bahauddin. The Rajanpur seat PP-247 vacated of Shahbaz Sharif has been captured by PTI candidate, Sardar Raza Ali.

It is interesting to note that Khurram Wattoo, son of PPP Punjab President Manzoor Wattoo has won the PP-193 Okara seat which was vacated by an independent candidate Mian Moeen Wattoo who later joined the N-League. This seat is also another loss to the ruling party and an indirect come back of Manzoor Wattoo who lost the May 11 election to the PML-N candidate. The PPP has also retained its seat in PP-292 Rahim Yar Khan which was vacated by Makhdoom Mustafa Mahmood. The loss of three seats in South Punjab, particularly after Hassamuddin Khosa failed to regain the seat vacated by his father in DG Khan, can negatively impact the PML-N position in that part. If the trend of mistrust against PML-N grew up, it may again give rise to the voice for South Punjab province.

NA-71 Mianwali has been won by PML-N candidate Obaidullah Shadikhel, who gained a better position after all major tribes came to back him up and the PTI had to change the potential candidate Ayela Malik, former MNA and granddaughter of Nawab of Kalabagh, after her disqualification by the court of law. After losing seat to ANP’s Ghulam Ahmad Bilour in NA-1 Peshawar, the loss on another seat earlier won by Imran Khan, was a huge loss to the PTI. This would go as big blow to the PTI as Mianwali is hometown of the party chief.The PML-N has added one National Assembly seat in Hafizabad to its strength while it was in close fight with the PTI candidate in NA-83 Faisalabad. On both seats the elections were terminated.

In May elections the PML-N had swept Faisalabad and victory on this seat would evince unchanged trend of the voters of that city, despite the fact local leaders of party have been crossing swords till the recent past.The PTI made a good mark by grabbing a PML-N PP-150 seat in Lahore. Till the filing of this report PTI candidate Maher Wajid Azeem was winning this seat with a margin against Mian Marghoob Ahmad, a former MNA of the PML-N. This is a big blow to the N-League which rules Punjab and had put up a team of legislators to run campaign in the city which undoubtedly is the political citadel of the party. Mian Marghoob and Mehar Wajid are both Arian.

Wajid had the latter had lost the May 11 election to Mahar Ishtiaq of PML-N, who has vacated this seat. The party sources say that in view of the track record of Mian Marghoob as MNA, a section in the party was fully in his backing.The PML-N regained with margin the NA-129 Lahore which it had fielded Shazia Mubashir after disqualification of her husband. On this seat a potential candidate of PTI Mansha Sindhu was repeating the election with tall claims but he failed to win over the lady who even did not show her face to the electorate. Neither in public meetings nor on posters.

The PML-N has proved its mettle by winning another two PA seats PP-142 and PP-161 by Khawaja Salman Rafique and Ch Gulzar Gujjar, respectively, routing PTI’s Waqar Ahmad and Khalid Mahmood Gujjar. The PML-N grabbed the Mandi Bahauddin seat which was vacated by Moonis Elahi.On the vacated seat of Prime Minister Nawaz Sharif in NA-68 Sargodha city, the PML-N candidate Shafqat Hayat Khan Baloch had defeated Malik Nazeer Sobi of the PTI, who had contested the last election as independent candidate.PML-N has also secured the PP-6 Rawalpindi which was won by Ch Nisar Ali Khan an independent candidate in the last election. – Nation